About Me and My Role as a Blurt Witness

I started my witness node on the day Blurt was born. The founders were scrambling to get enough witnesses to get the chain started, and I decided to pitch in by running a witness node.

Since then, we've had two hardforks that both went smoothly, and I was able to upgrade my witness node without a hitch.

I have also been granted the privilege of being a moderator in the Discord server. I will do my best to help those who need it whenever I can. Feel free to ask me questions about Blurt either on Discord or here on the blockchain. I'm happy to help.

Another part of the repsonsibilities of a witness is to vote on some chain properties. These properties include account creation fees, transaction flat fees, transaction bandwidth fees. I update these every once in a while, and I try to keep them low as to not make it too expensive for people to use the Blurt blockchain.

Here's a screenshot of my witness properties: 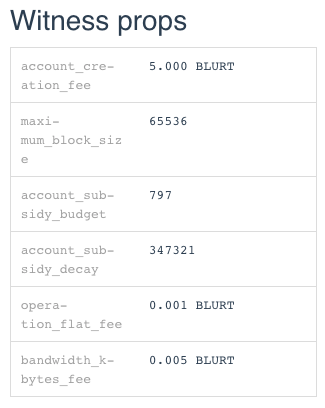 I'm currently operating two Blurt nodes. One is my main witness node, located in Toronto, Canada. The other is a seed node that can serve as a backup witness node in case the main one has problems. That one is located in Sweden.

I haven't setup any automatic failover yet, but I plan to do so as soon as possible.

Witnesses are a vital part of the Blurt blockchain. It's a good idea to use your witness votes and use them wisely. You can vote for up to 30 witnesses.

I recommend voting for witnesses who are involved in the community and take their responsibilities seriously.

To that effect, I have a personal policy of not voting for witnesses who haven't updated their properties. If you see a flat fee of 0.050 BLURT, and a bandwidth fee of 0.010 BLURT, it means they haven't bothered to update their fees and just left them on the default settings.

I'm not telling you what to do. That's just my personal policy. 😉

Here's a screenshot of the witnesses I vote for:

This is my preferred site for voting for witnesses. This site shows the properties that each witness votes for, so you can make a more informed choice. The only caveat is that this site only works on the desktop computer with either WhaleVault, which you can get at the Chrome webstore, or Blurt Keychain, which you have to download from GitLab and install manually with your browser in developer mode.

This is the official site. It works both with or without the WhaleVault or Keychain extensions, but it doesn't show the witness properties (at least not yet at the time of writing this post).

Choosing a Proxy Instead of Voting Directly for Witnesses

If you don't want to vote for witnesses yourself for whatever reason, and you have someone you trust to make that decision for you, you can choose that someone as a proxy for your witness votes.

To choose a proxy, you can just go on the official site, and scroll all the way down, and there is a box where you can enter the name of the account you want for your proxy.

Well, folks, that'll be it for this one.

witness introduction blurt
last year by saboin
472.96 BLURT
26 votes
$5.54
12
Authors get paid when people like you upvote their post.If you enjoyed what you read here, create your account today and start earning FREE BLURT!
Sort Order:
[-]
cryptovijay  ·  20 days ago

Well written article @saboin, You are a real professional, I voted for you! Keep up the good work like you always done!

Thanks for the article. I love this

Thanks for the article, I may copy some of your text.

Just saw this... I will be voting for you.

Congrats, just voted for your witness

@saboin you have added professional value since day one and your support in admin and moderation in Discord is very much valued, I often see you helping others with technical issues. I am proud to have you as a witness and to vote your witness with my personal stake.

Thank you very much for those kinds words!

I've heard that's a pretty cool city 😀 .. Thanks for early witness support. Blurtians,..@saboin is knowledgeable and contributes in a variety of ways, vote his witness!

I've never been. It's about a 20 hour drive from where I live.

Thanks for early witness support.

Blurtians,..@saboin is knowledgeable and contributes in a variety of ways, vote his witness!

Thanks for your endorsement!

Awesome work. Voted for you.

Congratulations! I support this!

Well, you helped me a couple of times already on Discord so, the least I can do is give you my vote 👍