freakeao in witness •  4 months ago 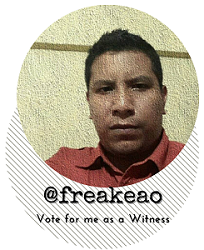 What is a Blockchain Witness?

According to the official documentation which you can read Here. The Blurt Blockchain requires a set of people to create blocks and uses a consensus mechanism called delegated proof of stake, or DPOS. The community elects "witnesses" to act as block producers and the network's governing body. There are 20 full-time witnesses, who produce one block every 63-second round. A 21st slot is shared by reserve witnesses, who are scheduled proportionally to the amount of community approval weighted by the participation they have.

Some of their main functions we can also read in the official documentation Here.

The role of a token in Blurt Blockchain is to verify incoming transactions, produce blocks when it is scheduled to participate in governance. In addition to this, there is a formal expectation that Witnesses will defend the Blurt Blockchain, review software and build the Blurt community. According to the above the Witnesses provide an infrastructure through a set of servers, computational equipment such as Raspberry Pi's or computers; in order to verify the transactions that take place within the blockchain. According to both documentations the witnesses play an important role by providing infrastructure, but they must also discuss all those changes or improvements that may exist within the Blockchain. At this point the witnesses must know all the changes that will happen at the programming level and the impact it may have on the platform to inform the general public.

Should I approve all Witnesses?

Each user within the Blurt platform has 30 votes they can cast in favor of witnesses. Therefore each witness must not only make a proposal to the community to receive a vote in favor, must work in favor of the blockchain, must promote it and above all make active life within the same, propose improvements, encourage improvements among other topics that can help the stability of the blockchain; For which the immediate answer is no. No user is obliged to vote for a witness, the ideal is that he/she makes a formal proposal to the community and all members of the platform, to make himself/herself known and above all to materialize his/her proposal. 6 months ago I started my project from home with the purpose of encouraging Spanish-speaking users; here you can see the original publication Witness Low Cost

Vote for me as Witness Link

Thank you for the witness update.

Congratulations, your post has been curated by @scilwa. Also, find us on Discord