India took revenge for the World Cup by whitewashing the Kiwis

One of the major reasons for India's exit from the T20 World Cup was the defeat against New Zealand. India could not score more than 110 runs in the full 20 overs against the Kiwis in the World Cup match. The loss of that match was the main reason for the departure of Virat Kohli's team from the World Cup.

It was not too late for Rohit Sharma's new Indian T20 team to take revenge. India have left the Kiwis in the T20 series at home. New Zealand could not compete in any of the three matches. The hosts won the series by whitewashing them. 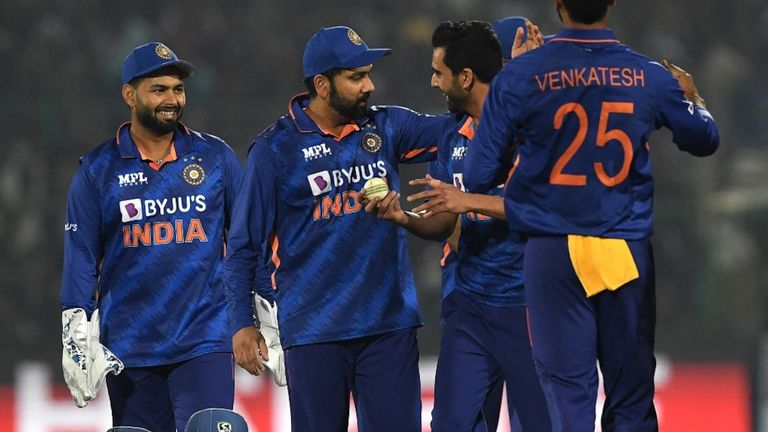 India beat Mitchell Santner's New Zealand at Eden Gardens in Kolkata on Sunday, winning by a huge margin of 63 runs. Batting first, they made a big collection of 164 runs. Later, New Zealand were bowled out for 111 in 18.2 overs.

Guptill was the only New Zealand batsman to chase down a huge target of 165 runs. The right-handed opener's bat came from four fours and six sixes in an innings of 51 off 36 balls. Only wicketkeeper-batsman Tim Seifert (18) and right-arm pacer Lucky Ferguson (14) have touched double figures.

Earlier, Rohit Sharma won the toss and elected to bat. He played 31 balls and scored 56 runs. India scored 164 runs for the loss of 6 wickets.

Rohit and Lokesh Rahul put together a pair of 69 runs. Suryakumar Yadav failed in this match as well as in the second match. He was out for zero. Rishav Pant was out for 4 runs.

sports r2cornell instablurt blurtnews blurtsport
2 months ago by taniaislam
25.79 BLURT
8 votes
$0.30
2
Authors get paid when people like you upvote their post.If you enjoyed what you read here, create your account today and start earning FREE BLURT!
Sort Order:
[-]
tomoyan  ·  2 months ago