funnel in splinterlands •  5 months ago

Dark Ha'on an UNTAMED edition , death's Splinter monster is really what we call a must have card
a legendary card with the 'taunt' and 'flying' ability from lvl 1 it is the perfect tank
the perfect tank when the battle rules allow it of course, it is not possible to use it every time in every battle

i tried a lot to get one but i didn't manage to lay my hands upon this dragon
just try to imagine my disappointment every time i was gathering the amount to buy it and by the time i was ready to buy it the price of Ha'on was climbing even higher....and then even higher, and my DEC were never enough to get it

in lvl 2 it becomes a scavenger!
in lvl 3 he gets void and in lvl 4 magic reflect!
you have no idea what this monster does to the rival's magic attack monsters!
truly an ultimate weapon, a solid tank ,protector of your team!

you can click on the following link to see my battle in which i used the Dark Ha'on
....Dark Ha'on's battle...

so here is how this game developed
first of all i have to thank my friend @koskl who delegated his Dark Ha'on to my account
@koskl is one of my great supporters , he has delegated too many serious and powerful cards to me
without these cards for sure i wouldn't be able to get these results

with 99 mana points i could pick any monster from any Splinter, death Splinter pop immediately in my mind cause i thought i could exploit the earthquake rule with the two legendary death monsters Cthulhu and Dark Ha'on
but i knew my rival would be stronger than me so i had to pick a summoner which could bring me some balance with his attributes
who i picked?
but of course Mimosa 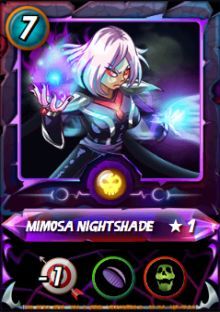 what was my plan?
i wanted to use Dark Ha'on in second place in order to taunt my rival's team and mislead their attacks...in the first place i thought i could use my Sand Worm
yes i know it is an assasin but i didn't want to kill my opponent's support line
i wanted to destroy his tank and the Sand Worm looked the best for this job
in the meantime Dark Ha'on would take all the damage from the other monsters leaving the Sand Worm alone to complete its work

everything went as planned , Mimosa did her job with the affliction ability so my rival could not heal his monsters and everything rolled smoothly

let me demonstrate my team
in the first place the Sand Worm , for the reasons explained above
in second place Dark ha'on according to plan
in the third place Cthulhu , another legendary magic attack monster, killer and tank at the same time
in the fourth place Soulstorm, a range attack monster with a massive attack power of 3 points from lvl 1, its flying ability was perfect against the earthquake rule
in the fifth place Dark Enchantress was perfect to support the team with 2 magic attack points
in the last position i picked my Phantom Soldier an epic monster which i considered very nice choice for this battle

the battle was Epic!...i enjoyed every single hit and i was anxious to see if my strategy was correct
i was a bit concerned about my opponent's tank , a massive lvl 4 Clay Golem which had 12 points of Void Life (including buffs) but eventually i was victorious

my strategy was correct plus my opponent was a bit careless i think so this lead him to a loss
my casualties were almost none
i lost my Sand Worm because of the earthquake feature but further than that i kept all my monsters alive
i won 44 DEC ( very nice prize, we are talking about $0.31 speaking FIAT ) but the satisfaction from the victory was even bigger!

splinterlands battlechallenge spt battle challenge
5 months ago by funnel
43.78 BLURT
6 votes
$0.53
2
Authors get paid when people like you upvote their post.If you enjoyed what you read here, create your account today and start earning FREE BLURT!
Sort Order:
[-]
tomoyan  ·  5 months ago