Palestinians have a habit of rising up when they are at their weakest and most desperate and have been demonstrably abandoned to their dire fate. And that is what they did in 2021. The expulsions of Palestinians from their homes in Sheikh Jarrah neighbourhood of East Jerusalem and the repeated raids on Al-Aqsa Mosque, which in Israeli calculations would have pit the might of the state against the sequestered and pauperised residents of East Jerusalem, mobilised Palestinians inside the Green Line, first to the Holy City and then within Israel. 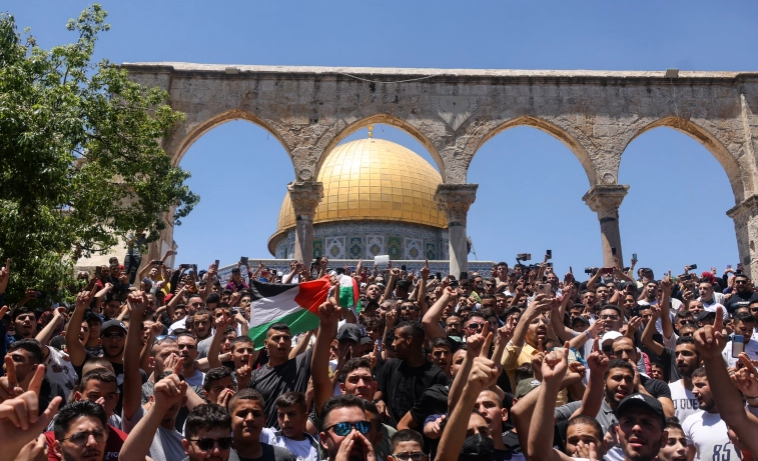 In contrast to its previous confrontations with Israel, this time Hamas struck the first blow and did so for reasons that ostensibly had nothing to do with conditions in the Gaza Strip. Within days Palestinian demonstrators in Jordan and Lebanon, along with at least as many Jordanians and Lebanese, were massing on the borders while increasingly large demonstrations erupted throughout the West Bank and Arab world in support of the Palestinians.

In Washington the top military officer, General Mark Milley, warned of the “risk [of] broader destabilization… [and] a whole series of negative consequences if the fighting continues”. The chief myth-makers, in other words, were revealed to be Kushner, Netanyahu, and their now invisible partners.

Collectively, the mobilisation sent an unmistakable message that despite all efforts to the contrary, Palestine remains a national as well as an Arab cause. Perhaps it was on account of the powerful resonance of Al-Aqsa Mosque. More likely it was a confluence of dynamics that produced a collective realisation that if rights are not defended here and now, they will be lost forever. In any case, the municipal model of Palestinian politics has been shattered.

In the recent past, the 1987-1993 Intifada led to Oslo, while the 2000-2004 Intifada concluded with Abbas in power and the Palestinians largely domesticated. Israel and its Western allies will now work hard to re-pacify the Palestinians, and revive a model that has focused Palestinian attentions primarily inward and functioned so well for their adversaries.

r2cornell blurtstory blurtlove blurtnews blurt
2 months ago by oryza788
7.63 BLURT
5 votes
$0.10
1
Authors get paid when people like you upvote their post.If you enjoyed what you read here, create your account today and start earning FREE BLURT!
Sort Order:
[-]
blurtcurator  ·  2 months ago