At a glance, the latest information about the Covid-19in the world, including Bangladesh

181 identified in the last 24 hours in the country 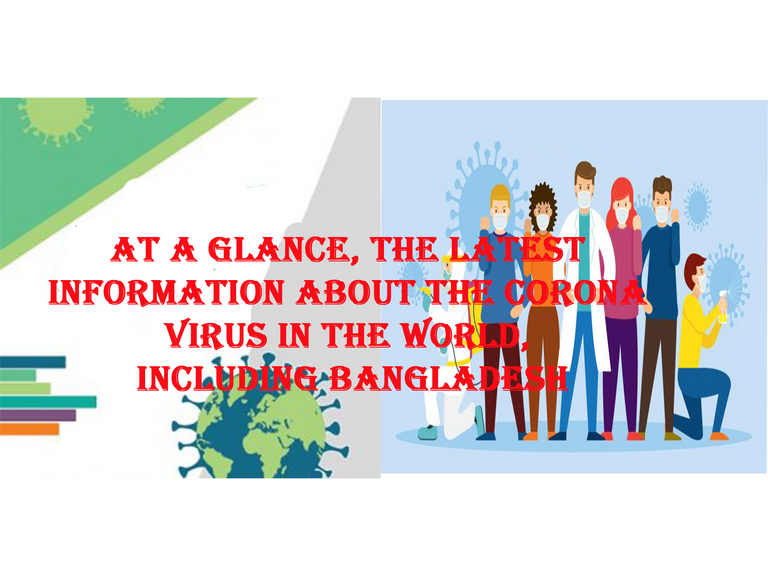 This information was given in a press release of the health department on Sunday afternoon. It also said that 3,056 people recovered from Corona in 24 hours. So far, a total of 14 lakh 8 thousand 721 people have recovered. 25,084 samples were tested in 24 hours. The detection rate in the sample test is 7.48 percent.

51 more people died in the country in Corona

In the last 24 hours, 51 more people have died in Corona. The total death toll stood at 26,931. Besides, 181 people have been newly identified. The total number of identified patients stands at 15 lakh, 30 thousand 413 people.

This information was given in the regular press release of the health department on Sunday.

According to the notification, 3,056 people recovered from Corona in 24 hours. So far, a total of 14 lakh 8 thousand 721 people have recovered. 25,084 samples were tested in 24 hours. The detection rate in the sample test is 7.48 percent.
Earlier on Saturday, another 47 people died across the country. Besides, the corona was identified in the bodies of 1,326 more people.

Despite the decline in infections, the number of deaths and deaths from the deadly coronavirus has recently dropped in Bangladesh, according to the CDC's list of 'High-Risk' Countries. From 6 am on Saturday to 8 am on Sunday, 51 people died in Corona in the country. The infection has been identified in 1 thousand 61 people.

Although the number of infections and deaths in the country is relatively low, Bangladesh has been listed as a 'high-risk country' by the US Department of Public Health - The Centers for Disease Control and Prevention (CDC). More than 60 countries, including Bangladesh, have been included in the list.

Considering the risk of the corona, the CDC has divided all the countries in the world into four parts. The countries with the worst Corona situation have been placed in the category of high-risk countries. Then there are high-risk, moderate-risk, and low-risk, respectively.
According to the latest CDC figures, Bangladesh is one of the most at-risk countries. Among the South Asian countries, besides Bangladesh, Maldives, Nepal and Sri Lanka are also on the CDC's high-risk list. There are also names of Myanmar, Iran, Iraq, Malaysia, Turkey. Neighboring India and Pakistan were once on the list, but now the two countries have dropped to the fairly risky list.

Meanwhile, Afghanistan, Cambodia, Indonesia, Japan, the Philippines, and Russia are on the high-risk list. The low-risk list includes China, New Zealand, and Taiwan.

The CDC recommends that U.S. citizens refrain from traveling to high-risk countries. And if you have to travel, you should take the corona vaccine beforehand.

Former Australian PM fined for not wearing a mask

Former Australian Prime Minister Tony Abbott has been fined for not wearing a mask. On September 8, a man took a picture of himself without a mask on a beach in Sydney and complained to the police. New South Wales State Police fined the former prime minister 500 for the allegations. He was fined for violating public health rules.

According to an eyewitness, Tony Abbott had a long discussion with a friend shortly after the mask. Earlier, the country's deputy prime minister was also fined for not wearing a mask.

Despite the severe lockdown, delta-type infections of coronavirus continue to increase in the state of New South Wales. A total of 1,262 people were diagnosed with the infection in the state on Monday. From the beginning, till now 43 thousand 438 people have been infected and at present 15 thousand 698 people are infected.

For those who will go abroad, if there is no passport number in the Karna exam certificate, then no liability will be charged: - Yabiprabi

The authorities of Jessore University of Science and Technology (JUST) will not take any responsibility for the corona test certificate without the passport number of the passengers who want to go abroad to cross the immigration at the airport and land port. Recently, the Associate Director of the Yabiprabi Genome Center, Professor. Iqbal Kabir Zahid has given letters to Jessore district police, Benapole land port, and other places.

The letter sent by Professor Iqbal Kabir Zahid said that it was not possible to verify the identity of the sample giver as the passport number was not attached at the time of giving the sample. In this case, if the passport number is not mentioned with the result of the Covid-19 sample test for the passengers going abroad, the authority of Jessore University of Science and Technology will not bear the responsibility of the report of that test.

The letter sent by the Jabiprabi Genome Center said that it was not possible to verify the identity of the sample giver as the passport number was not attached at the time of giving the sample.

To keep the country's reputation intact abroad, Professor Iqbal Kabir requested the passengers who want to go abroad to come to the Genome Center and University Campus with the passport number and fill-up the form properly.

According to the university, samples are being collected from the Genome Center seven days a week from 10 am to 1 pm. Results are being sent by sending a text message to the designated website and mobile phone within just 12 hours of submitting the sample. There is an opportunity to test the sample in Jabiprabi by paying the prescribed fee of Rs. 1,500. Passengers wishing to travel abroad must bring their passports.

instablurt news writing covid-19 life
last month by shariarahammad
26.12 BLURT
3 votes
0
Authors get paid when people like you upvote their post.If you enjoyed what you read here, create your account today and start earning FREE BLURT!