HOW TO BUY BLURT TOKEN ON HIVE-ENGINE

This is a guide on buying Blurt token on Hive-Engine quick, fast and easy. 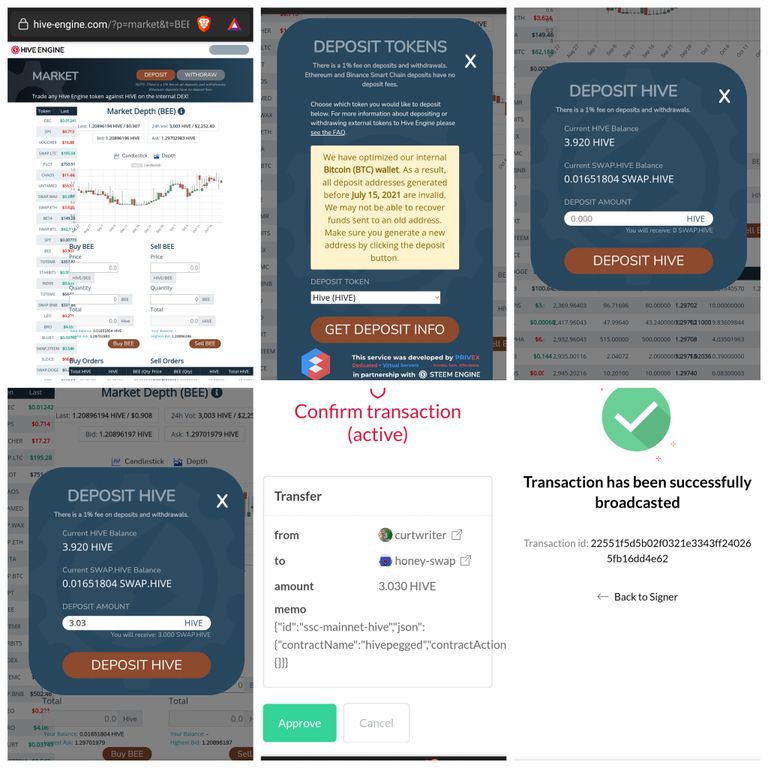 Once you have your Hive token on the Hive-engine.com platform, it’s time to exchange it for Blurt. To get to the Blurt market, simply click on the tokens tab and search for Blurt in the search box above. 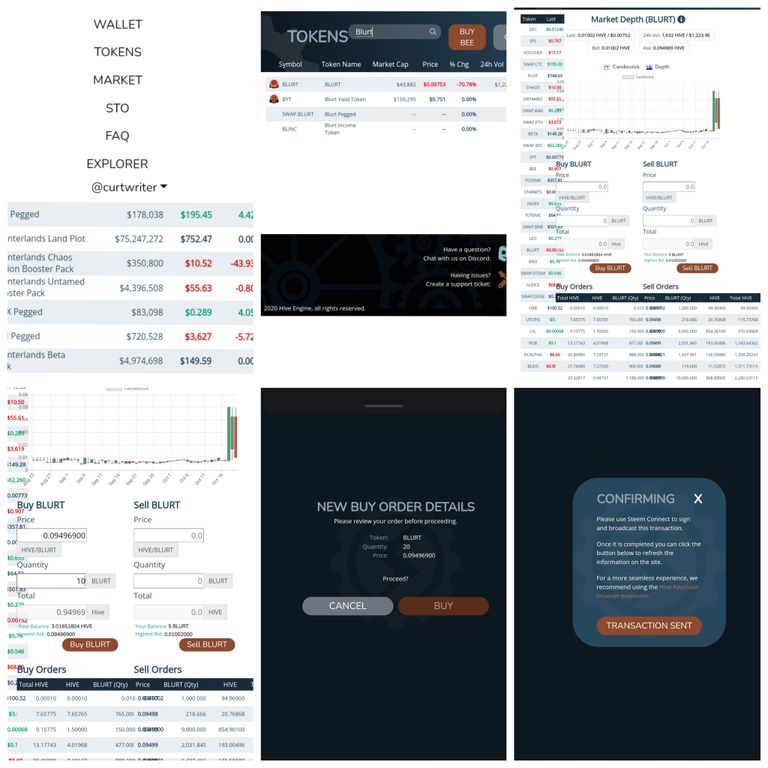 Sending Blurt to your Blurt.blog wallet

If you are buying Blurt in order to power-up so as to increase your stake, or delegate to someone, then you need to send your Blurt token from Hive-Engine to your Blurt.blog wallet.

This is pretty easy to do. Unfortunately, you can’t simply click on the withdraw button and take out your Blurt token, you need to go via the sending route. There is a bot that takes care of withdrawals and deposits. To send, all you need do is 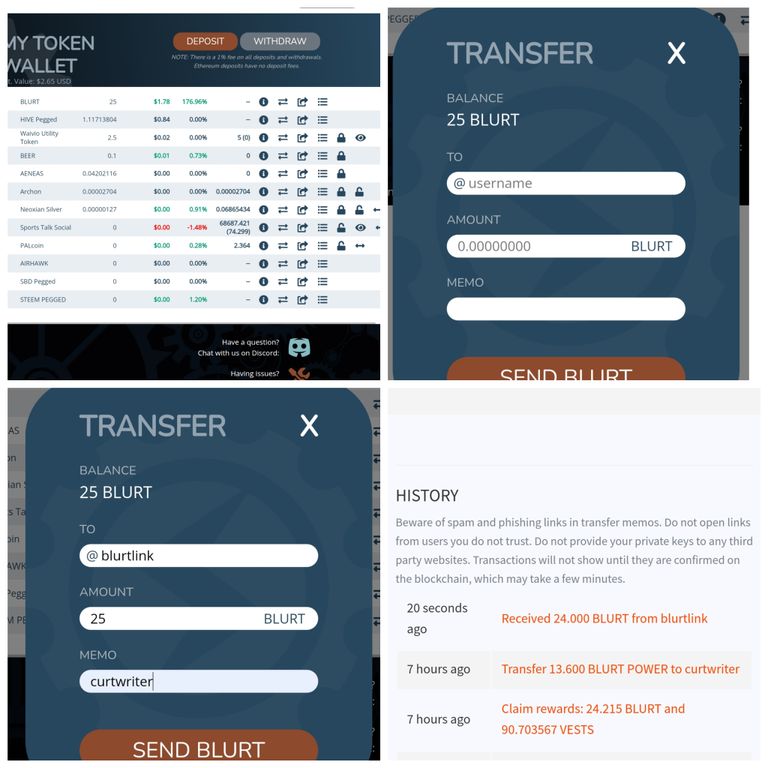 That concludes it for our tutorial on how to purchase Blurt from Hive-Engine.com and send to your Blurt.blog wallet. Thank you for reading.

Thankyou for this tutorial, very useful, just waiting for my power down to finish then can transfer now knowing this.
I just test transferred 130 hive to the blurtlink. How long before I see it in my blurt wallet?
@ajerkoff is this legit?

Are you sending Hive or Blurt via blurtlink??

Hive was sent to blurtlink. I've also swapped some pob for blurt on hive-engine but now don't know how to send that over LOL

Indeed it is tgal.

cool, am almost all unstaked, working on the pobs next

It's usually almost instant. I'd check this with @yehey in the discord group.

The script is working as normal, though hive-engine are busy processing transactions.

I blog about it to keep our community aware.
https://blurtworld.com/blurt/@yehey/blurtlink-deposit-to-hive-is-working-but-sluggish

No worries, all transactions are recorded in the blockchain and transfer will complete. Even Ethereum transfer takes hours last time I checked.

@yehey, being like many of us in the social blockchain world, many of us are ignorant when it comes to how things work. She accidentally sent you Hive thinking you were an exchange that would convert it to Blurt. You can see here she sent you 130 Hive. 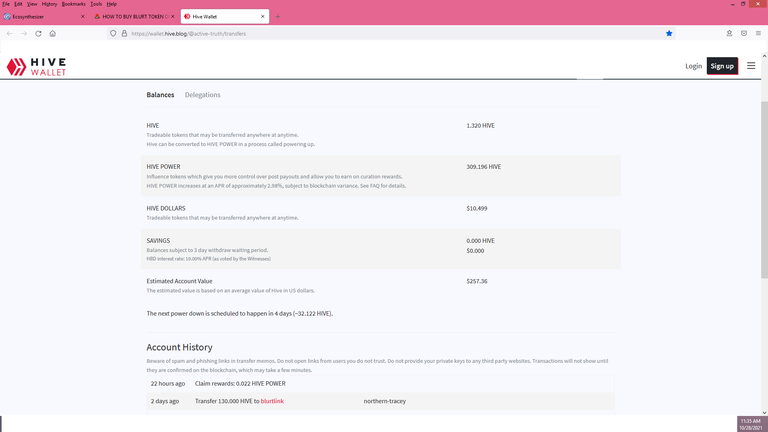 Can you please return her funds now that we have clarified what went wrong on her end. Then she can send it to an exchange like Hive Engine and trade it for Blurt and then send it through your service to her Blurt wallet. I apologize for any inconvenience this is to you in your busy schedule, and appreciate any urgency you can place on this as she has been waiting for two days not understanding what has went wrong.

The transaction she did was done since yesterday and it hasn't reflected. Almost about 24 hours.

I equally did a withdrawal from Hive-engine to blurt about 1 hour ago, but no sign of an arrival.

frot had a similar problem, but I think that was hive, unsure, ask him, I get lost with all that is going on, sorry tgal.

It was hive I sent, getting a tad worried now. Can I also send POB this way if it sorts itself out?

So I took it upon myself to try to help this get fixed. The issue is that you sent your Hive to Blurtlink. I'll explain how that works, as I myself didn't understand until earlier this year.

Hive engine doesn't support a direct transfer to ones Blurt Wallet. Seems ridiculous as I would assume they must have a Blurt wallet themselves to hold the Blurt being traded there.

I've reached out to him in another comment here detailing exactly what happened with a snapshot and link to your wallet so he can quickly ascertain for himself what has happened and rectify from his end what is surely a frustrating experience for you. You can see my comment here.

Please also know that if you choose to send your hive to an exchange other than Hive engine using Blurtlink will not work, you will send the Blurt direct from those exchanges to your Blurt wallet. It is due to the restrictive structure of Hive engine that one must use Blurtlink instead of just directly transferring as one does from other exchanges.

I also wish to add that @yehey is considered one of the foundational structures here at Blurt, running not only a witness and his bridge between Hive engine and Blurt, but he also runs the only other front end I'm aware of for Blurt. I've watched so many drop off, and he has stuck with Blurt through all the troubles. He has had my witness vote from early on in my time here, and to put this in perspective half of my witness spots are open. I've no doubt once he has an understanding of what happened per my elucidating it for him, he will promptly rectify what has happened. He is very busy and I think due to that he wasn't fully grasping what happened, and probably just looked and saw you sent no Blurt on blurtlink and dismissed it as anything that might have gotten stuck in his system

Tgal, I claim not to know, I leave that to others,

I admire how much zeal you have towards making blurt better. Thumps up

Thank you for your contribution to the Blurt ecosystem.

Please consider voting for the witness @symbionts.
Or delegate to @ecosynthesizer to earn a portion of the curation rewards!