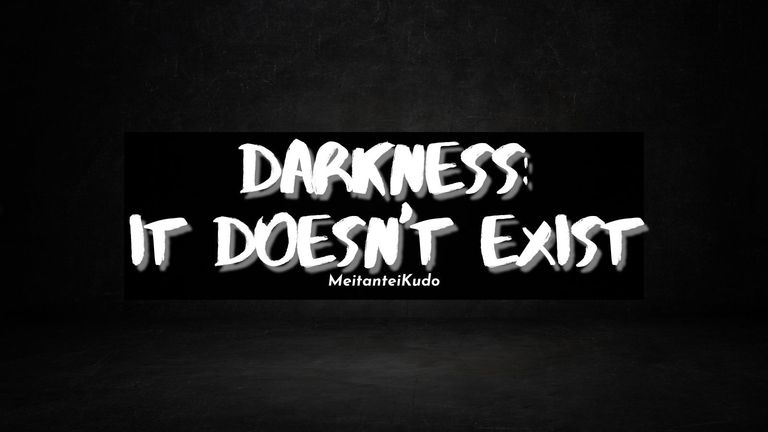 That's how the song goes. I am reminded of that song whenever I hear the word darkness. When it comes to the word "dark" however, only that bitterly sweet and luscious confectionary comes to mind.

Another aspect of life where we relate to darkness is the bad things that happened or things that we have done. Some of us may have what we called colored pasts where maybe, we had run-ins with the law, maybe some of us committed some crimes, maybe we had those illicit affairs and all those that could be another face of what we call darkness.

Once there was a man that went out with a girl he don't really know. They met one night and one thing lead to another and they both end up in the same bed. While sharing the intimate moments of bliss, she said "you're safe right?" He nodded in agreement and then he countered with a compliment/question.

"Why are you so good at this?"

She answered amidst moans, "I have a dark past."

He did not pry anymore and just enjoyed the moment. But the curiosity lingered around his mind. What does she mean by that? Why did she say that? What on Earth could she have done to be entitled to such a claim? And what was with that statement that made her more attractive to his eyes?

In general, we tend to link darkness to crimes. A man leads a dark life when his life is smeared with deaths, murders, and other heinous crimes. But as I said, darkness does not exist. It's just the absence of light. In some cases, this darkness where doing crime is the result may be due to the lack of control. Impulse control. Scientifically, our prefrontal cortex deals with these impulses. It's where our decision-making is concentrated. It is also where the sense of guilt, remorse, and compassion reside.

If a person's prefrontal cortex is damaged, all things that a person can do is normal and "righteous". He or she may not have that sense of right or wrong, hence, even in the people that we could call living on the dark side of life, darkness doesn't exist.

Just to throw it out there, even our definitions of right and wrong are non-existent. These are just moral guidelines that we humans came up with to keep an order of some sort. A lion kills a deer, is it right? Is it wrong?

Isn't it just out of instinct? Out of necessity? If you tell me that it is wrong, let me ask you, according to whom? Then what's the right thing the lion could do? Should it find it within him to live alongside the deer forgetting the urge for him to eat?

It's just how nature works. There's no right or wrong, there's just the question of capability. If one's capable of doing a thing, it can be done. If you are able to eat a lion, then it can be done. But what can be done, doesn't necessarily mean that it should be done. And that's why we came up with such concepts as "right or wrong". Of course, as a decent thinking human being, I would like to adhere to the concept of right and wrong, even though I believe that they don't really exist, to begin with.

It's just chaotic if none of us adhere to those concepts. Imagine if all of us give in to the urges deep within. If we allowed that little voice inside our heads to control us when it says "do it", "do it". Just how few people would be able to survive. That's some world I wouldn't want to be a part of.

And again, darkness does not exist, literally, it is just the absence of light. And if it's figuratively, we just associate darkness with things that we deem "bad", which inherently is also non-existent or subjective at the very least.

This has been a freewriting exercise that I did a while back. The prompt was simple and it was just a single word. The prompt was: DARKNESS. We may interpret it differently and the concepts may be related, they may be not. Some may also think of that certain blonde character who likes to roll around and a little M. Lol.

Anyway, thanks for the visit and the read.

freewrite instablurt blurtpilipinas blurttribe blurt
last month by meitanteikudo
38.94 BLURT
4 votes $0.15
0
Authors get paid when people like you upvote their post.If you enjoyed what you read here, create your account today and start earning FREE BLURT!