Happy Monday everyone. We pray this new week to be productive for every one of us. You might be seeing this as a surprising article because we didn't inform you about the event which came up yesterday, we are so sorry about that, we could have but it's because of our busy schedule these days.

The boys are participating in their first-ever competition which will commence in April during their second term holiday. We have paid a sum of $25 for the form, we will write more details about the competition in on if the coming days. 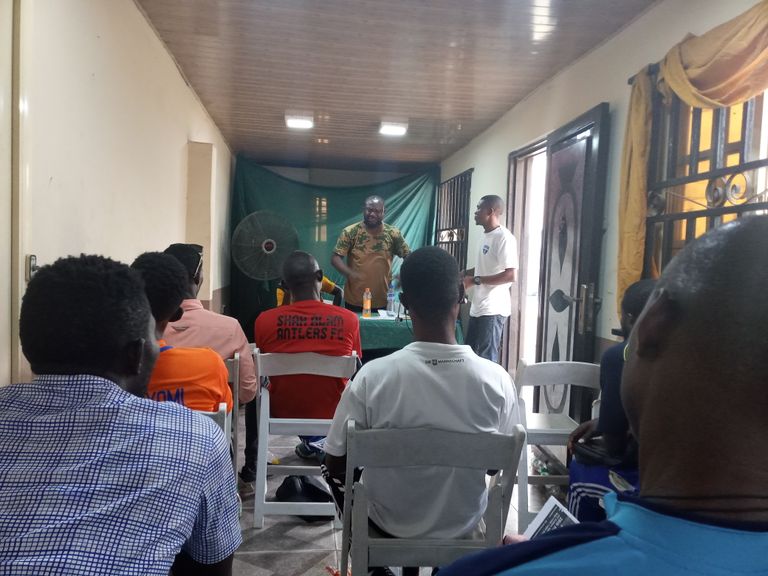 Yesterday, the Ultimate Soccer Academy in conjunction with Epe Divisional Football Association and Epe Football Coaches Council hosted a One Day Coaching Seminar at STS Stadium 🏟️ Bogije, Ibeju-Lekki, Lagos State. The Seminar fee is $5 and two of the DFA officials including the coach were presented there. The seminar was way too interesting and we learned a lot about Coaching yesterday while also met with other coaches from a far away. In the picture up are some of the executives/committees who gave talks on coaching. Even the Chairman of Epe Divisional Football Association was present. Out of his busy schedules, he scrutinized the time out to be at the even, he defined the term coach, talked about the benefits of being affiliated. He also answered some questions thrown by the coaches in the house. After spending some hours at the event he then left for another event. These are the coaches at the event from different local governments. Out of the coaches, some trained females, males, children, and adults, and some coach two to three teams. Some also coach schools, one of the top schools in Nigeria, Green Spring School coach (Coach Charles Warri) was among the executives at the event. That's Coach Charles Warri giving speeches about coaching; What's A Football Coach? What Skills Do Football Coaches Need? Preparing A Training Program… During his talks, he threw a question to the house that what his coach and the coaches gave different definitions. After the answers, he said coach has an uncountable definition and everyone has a different meaning depending on their viewpoint. One of the good definitions said there is that a coach is someone who builds players of different characters and abilities from different parts of the world and forms them into a team. After that, we went to the practical section of the seminar at the stadium. The boys are the ones who practicalized the issued instructions and the coaches stand outside the sideline of the field and watch. Coach Charles made the coaches know that warm-up depends on the weather, in hot weather your players should go on 15-mins warm-up, and in cold-weather your players should go on 25 mins warm-up. And also said we have two types of warm-ups which are the General warm-up and Specific warm-up. The general warm-up is warm-ups without the balls and the specific warm-up are the warm-ups with balls.

At the sideline, a coach made us know that no player can hold the ball for more than five minutes during a match. Many people disagree with this and some agree with this. But after the prove, the fact was taken to be true. On getting to the event before entering the hall, we were given a hand out which contains the event-themed Who is a Coach. These are the coaches checking the handout given to them. This is the Decentralized Football Academy head coach holding the handout. After the final speech, the coaches took pictures on the field. I don't have it here but when I collect it, I will share it with you in another report. On finishing the event. The coaches are presented with certificates signed by the Lagos State Football Coaches Association and The Chairman of Epe Divisional Football Association. It's a great event one wouldn't love to miss, we really enjoyed it ⚽ Football is a game of love ❤ and connections 📌

blurtsport football sports life blurtreviews
8 months ago by dfacademy
129.30 BLURT
9 votes
0
Authors get paid when people like you upvote their post.If you enjoyed what you read here, create your account today and start earning FREE BLURT!