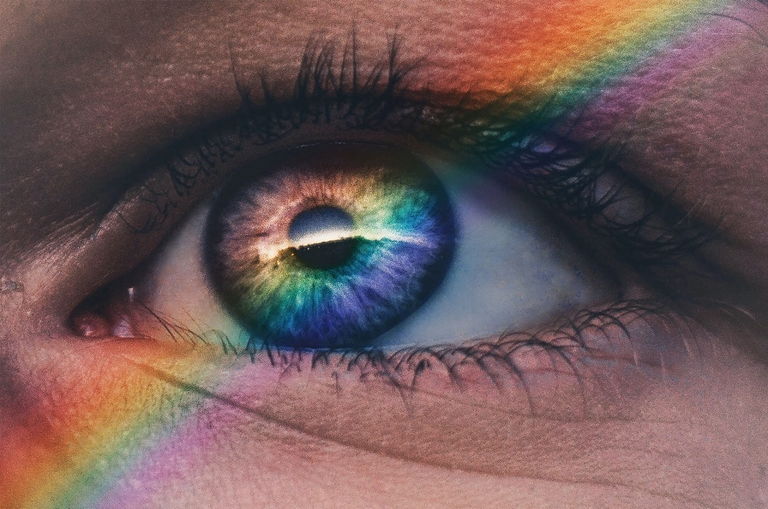 I was standing on the balcony with my son looking down at the city.

My son pointed and said,

"look. There is a cat over there."

I couldn't see the cat so I asked him,

"Look. It's on that green roof over there."

I followed his finger and saw the cat on a house with a red roof. I knew from that moment that he saw things different from me.

What you think you see is a wave of light. If you were awake in high school you might even remember something about a spectrum of visible light from 400 to 700nm. But what do we see?

We don't really see light at all but we see a reflection of the light. If we look into the sky we perceive blue sky and white clouds. But what is really out there is a spectrum of light and more.

Our eyes only catch the blue wavelengths because that's what is reflected from the gases in the atmosphere. The other wave lengths pass through and are finally reflected off the ground as green or red.

In the case of color blindness the light-sensitive cells (cones) in the retina of the eye respond to certain colors are physically affected so colors are not distinguished. But there are other factors besides physical disorders which cause color blindness.

Just tell me which color is different from the others. One of these squares is not like the others. Unless you are a tribe living in a forest you should be able to recognize the one square that is different here: 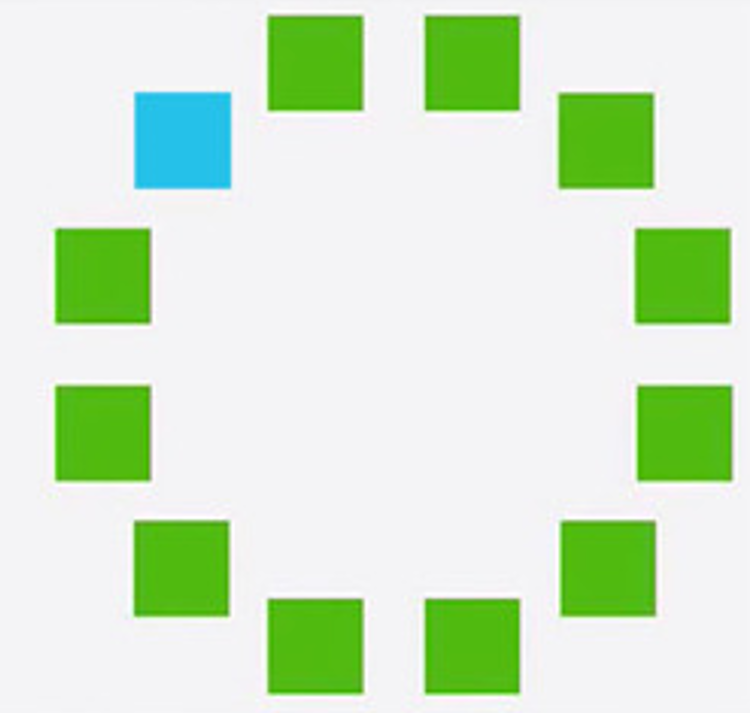 They were given this test with 11 green squares and one obvious blue square but it wasn't obvious to them. It was not easy for the Himba tribe's people to spot the one square that was blue. If they did then it was after a long time or after several guesses.

The Himba tribe however has a lot more words in their language to describe green than we do in English. For them it is easy to distinguish green for green.

Here is the test for green:

Which square is different? 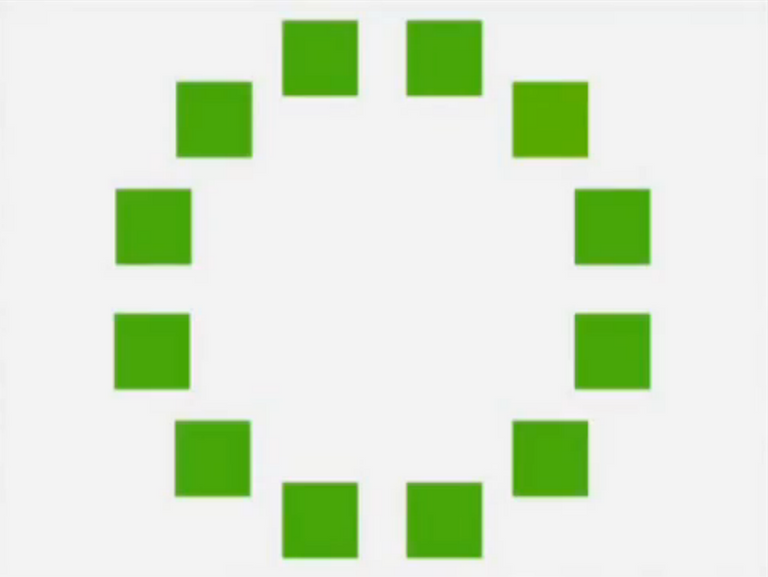 This one is not so easy for me.

I know green and light green and dark green and that's about it. I can't tell the difference or spot the odd one out.

For the Himba tribe's people it was quite obvious which square was different. They all got it in a second.

Did you spot the difference? What makes one eye different from another?

Is one right and the other wrong?

The Women of Algiers

The title are almost the same. The subjects are basically the same. One is hanging in the Louvre and the other was sold for 179 million dollars. They are both priceless.

The difference is one hundred years of spectrum expansion. In 1955, the artist's perspective and use of colors well surpassed the spectrum of 1834.

The future of art will be influenced by how much of the spectrum we perceive.

White light goes through a prism giving us a spectrum of visible light, but there is more than that small window of 400 to 700nm.

Beyond red (more than 700 nm) is infrared range. It is know that some vipers can detect infrared light. The viper can sense heat from the low frequency infrared light waves.

Beyond violet (less than 300nm) is ultraviolet. These are high frequency light waves but they are detected by birds like hawks, bumblebees and reindeer .

In astronomy there are Telescopes like the Hubble telescopes which are designed to capture images from the electromagnetic spectrum in wavelengths that would otherwise be invisible to our human eye..

Although our eyes are weak and easily deceived by culture and language we must expand our spectrum to include colors we cannot even describe.

I've been busy the past couple weeks enjoying some time off with my family, but I do cherish the community we have on Blurt. I love the fact that we can speak freely and our voice is heard.

On another media site they would be blocked for just stating their beliefs. But here there is a wider spectrum of understanding.

Which square was the different square anyway?

Can we even see green?

This song by Pink Floyd is called "Brain Damage" but what I remember is the word "lunatic on the grass". I think this is the song the Album "Dark Side of the Moon" gets its name from.

There are differences in the way that we perceive things. It really doesn't mean that one way is better than another. There is so much more out there for us to perceive.

My son is color blind but in some way he can see way better than me. He has a way of seeing and a perspective that makes him truly unique.

Who can say that he is right or I am right?

Maybe Green is the new Red. 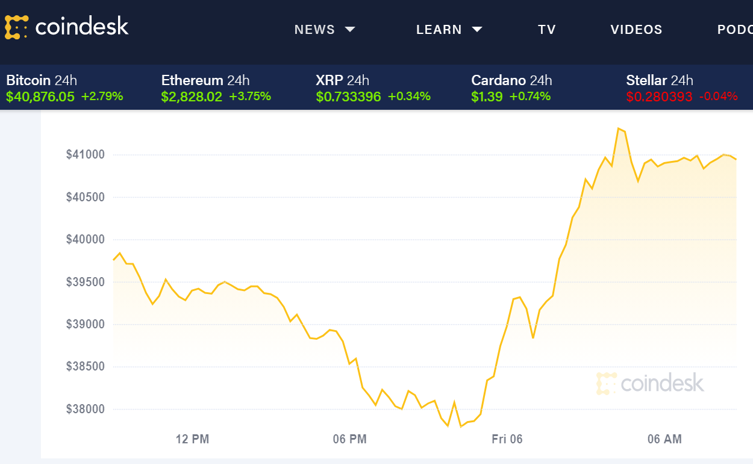 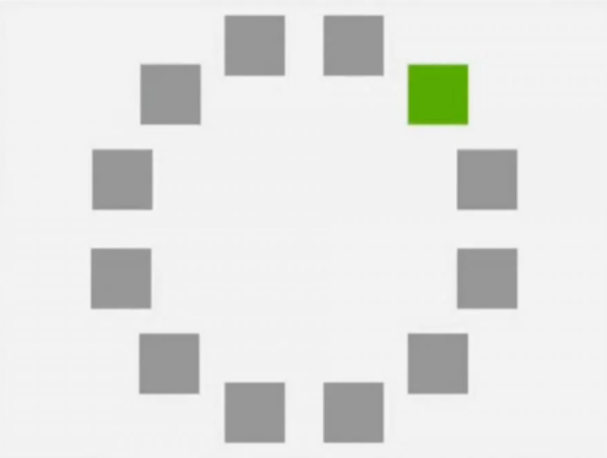 blurtmusic blurtlife blurt r2cornell blurtpower
2 months ago by mineopoly
593.91 BLURT
17 votes
1
Authors get paid when people like you upvote their post.If you enjoyed what you read here, create your account today and start earning FREE BLURT!
Sort Order:
[-]
dsc-r2cornell  ·  2 months ago

Congratulations, your post has been upvoted by @dsc-r2cornell, which is the curating account for @R2cornell's Discord Community.