The affordability of living in a developing country, is it good or bad?

What is the cost of living in the city in a developing country?

Three years ago, when I finished my undergraduate degree, I decided to move to the city nearby the province [rural] where my university is located. I thought, for almost two decades I have already lived in the province and I wanted the accessibility and comfort of living in the city. Fast forward to this year, where we in the Philippines is still experiencing the lash of the pandemic, I realized that I was only half right and half wrong with what I thought about the life in the city. The accessibility and comfort meant that I have to pay a higher cost; if I don't afford that sum of money, then life in the province would be much bearable. I have lived in the province almost all my life, that's why I've learned to be thrift on my lifestyle. 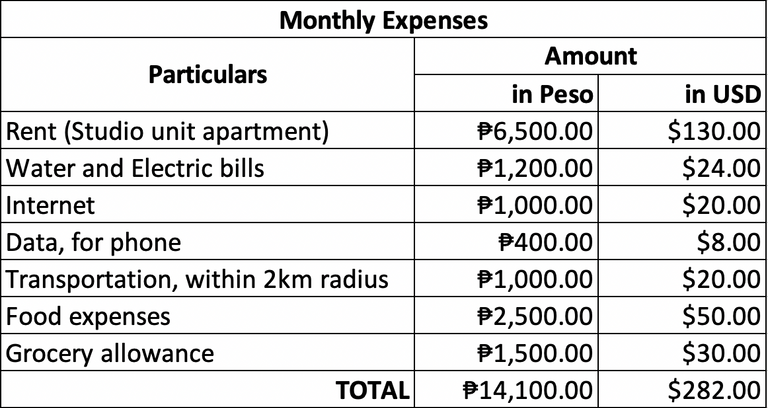 Here is a table of my monthly expenses (I live in Metro Manila, the region where the country's capital is located), these just cover the place I live in, food I consume, and the city services that I can't get away from. The place where I live is a comfortable one, the grocery store, pharmacy, restaurants, and universities are within 2 km radius. Its only flaw is that the space of the apartment is cramp. Since I share the place with my sister, I am able to split some of my bills. For the food expenses, I stay on the budget of just spending money for my lunch. I usually eat my breakfast and dinner at home so I just cook my food. Evaluating my food expenses, if you're someone who eat dine-in most of the time, you're food expenses could blow up to $180 😅. I didn't add to this list the fees you'll have to pay when you want health insurance. It's not covered by the state unless you pay voluntarily or if you have the means, you can afford the ones offered by private companies which costs $50.


Sometimes I could still cut down the total cost by exerting more effort to live simply, meaning I exchange the things I've wanted in living in the city. I've learned to look at the brighter side of things though. For example, since the university where I work/study is just 2 km away from my apartment, I just walk my way to it. That will save me $20 of transportation allowance, it's just a small amount in other countries, but from where I live that can be someone else's monthly savings.


If living in the city is so costly as what I'm spewing here, why would I want to live here? Well, aside from the accessibility and comfort that I have mentioned previously, the opportunities that I want in life lies here. After getting my undergraduate degree, I decided to go to graduate school and get a master's degree. The university that offers the program that I wanted is in Metro Manila. Luckily, I got an opportunity to work as a research assistant in our institute, that saved me the cost of working and studying in different places. The salary that I get was enough to cover for my monthly bills, tuition, and other expenses of being a student [again]. I did have time and resources to enjoy some time off with friends and family during weekends. To be honest, I would have to be very thrifty during the weekdays to afford going out on weekends.


In my experience, I'd say that I've been so lucky and truly blessed for ending up on opportunities that made the past three years of my life in the city bearable. I have met and known a lot of people, friends that I cherish, experiencing more difficult circumstances than me. With the average salary a person in early to mid 20's get, it's only enough to sustain one person, but some of my friends have to the bread-winners of their families. So, how can we then make ends meet in this kind of situation? I'd say work harder, work the longer hours, and exhaust every possibilities where you can make money. That's a bold to say, but that's the reality. I once read a published article that said about the rich gets richer and the poor gets poorer. It's a phenomenon famously termed as the The Matthew effect which is derived from the bible verse ‘For to all those who have, more will be given’ (Matthew 25:29). Why am I talking about this when I should just be listing down the cost of living here in our country? It's because it's become a cultural tradition. I believe that it's not just something that I should factor in as a local tradition to where I currently live, because the world has embrace this phenomenon. And in developing countries, this is most likely experienced by the many.


This must be discouraging, how can I or how can we break this barrier? On the top of my mind, it's chance. The chance to just even go against the current. I haven't really read much about the Matthew effect but on some articles, there were a few who make it. If I would have to move to another city [in another country] this will be something I would have to consider. That's for you to consider too, if you are interested in moving to Philippines to study, aside from the estimated monthly expenses I have given, you'll have to consider where you're coming from. As for me, I'll be trying to break this barrier of being able to afford the opportunity to study in well developed countries when I barely afforded my education here.


This is actually my entry to OCD Community Boost Contest featuring Home Edders but I'm afraid I have said a little too much about the question posted. It's amazing how by answering the simple question "What is the cost of living like in your country or region?", I got into an in-depth picture of having to afford the things that I need and I want.
blurtlife economy education blog culture
last year by travelingmercies
71.34 BLURT
7 votes $0.76
1
Authors get paid when people like you upvote their post.If you enjoyed what you read here, create your account today and start earning FREE BLURT!
Sort Order:
[-]
blurtcurator  ·  last year