After the tremendously successful launch of 'ZERO BUSH REPORTS' on Blurt, all our dedicated office staff have now decided to not be as dedicated. 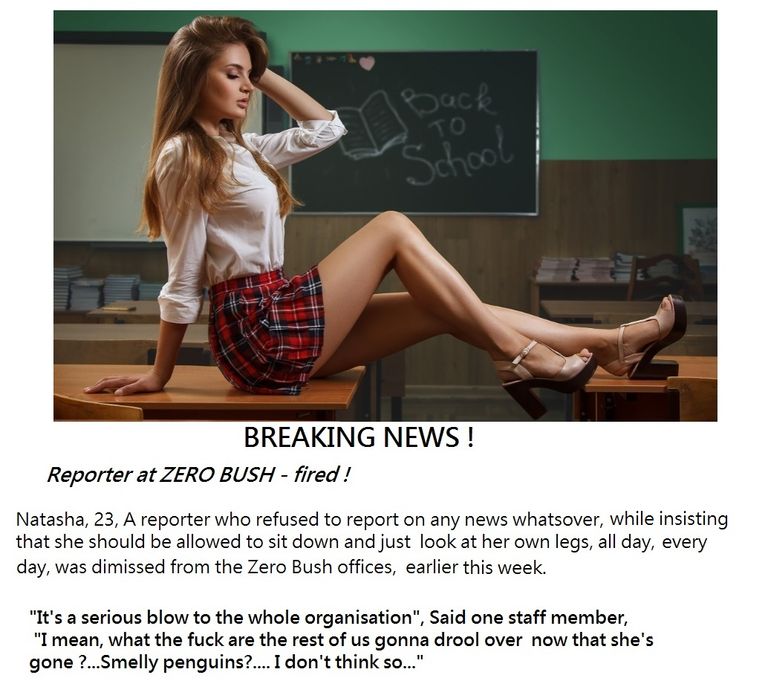 Not that it changes anything, in regards to the 'Zero Bush Reports' .

The in depth, serious, and amazingly revealing articles will continue as per usual.
These reports rely solely on the efforts one solitary penguin who sits in the corner of the office and smells of fish....
(as do many of the other 'non penguin' staff come to think of it....But that's not important right now).

What this means from now on - is that we'll be releasing a daily report of up-to-date world events - as they unfold !

The smelly penguin in the corner does love his deep penetration style reports - but due to time constraints and a recent development of him now having to make his own coffee , and with all that's happening in today's global chaos , his love of getting 'balls deep' into news stories and dissecting them more than a really dedicated student of dissection - is simply not possible.
To go so deeply into every juicy story, would entail working over 23 minutes a day, and that's simply a step too far.
....He likes his work so much - he even offered to work up to a full 35 minutes each day - but we had to decline his kind offer offer, on mental health grounds. Our mental health, that is... ._

What this means going forwards for our beloved loyal audience of 3, is this:

Zero bush report will continue as per normal - as long as the anti-social penguin in the corner gets his daily sardines.
(... 'cos if he doesn't get his fishy bits, everything'll be, like, totally fucked).

....This new format will be made up of a few short news article segments taken from news stories around the world - and then condensed into one short post of several thousand words an' piccies..... And gifs.....let's not forget the gifs .....We like gifs.

Here's some of our dedicated staff members who'll be working tirelessly* to present Zero Penetration Reports - sniffing at the juicy bits....

*No one in the office has a car, bike, or one of those silly two or three wheeled trikey things.
......you know, those scooters things that were once toy's for pre-adolescent kids, but are now driven by idiots in big cities who go to work on them ...(and who, ironically, are very similar to pre-adolescent kids).

Due to our rapidly expanding readership (estimated to have reached 15 by 2029) we're now taking on staff to support our pretend hardworking team.

1/ GIF WIZARD.
We're looking for someone to tell us if it's possible to load gif's - with audio - onto Blurt (and what file format to use if it is).
This position is a temporary one .
Once we've extracted all the necessary details that we need, and sucked you dry of all your useful information- like a vampire sucking blood who's not fed for like, a reeeeeeally long time - you'll be gone....Outta the door...adios...

2/ @IONOMY WIZARD.
The position involves having a very close working relationship with the smelly penguin in the corner, and comes with lot's of fringe benefits...(especially if you're a hottie).

This key support role will involve telling the smelly penguin just how the fuck to transfer crypto from the @ionomy exchange -directly - into his private crypto wallet ....('cos he hasn't worked it out yet - or even if it's possible...).

He's suffering terrible stress at the moment by having to convert crypto into 'the token that shall not be named' (because it's even more smelly than a putrid fish) ....And then converting that into LTC, to go into his wallet...
This temporary position pays up to 5 Blurt (depending on results) .

Fringe benefits (depending on aesthetics) include free keep fit programs* and free food ! (if you like sardines).
Facilities include a not very large desk to run around, while being chased by a demented penguin...(Thus guaranteeing a strenuous, yet fun, cardio workout program). 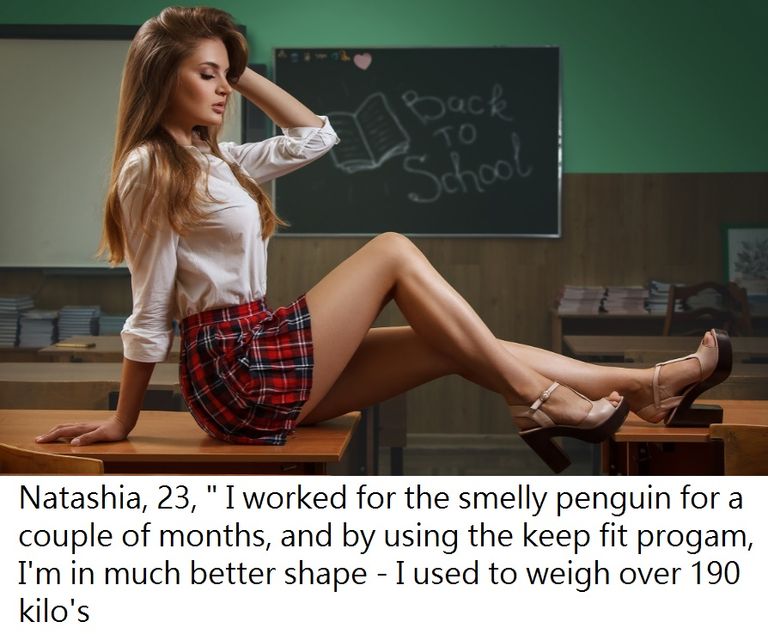 @ajerkoff , @rycharde and @frot are not eligible for any of these positions due to 2 stroke disabilities, tranny issues, and..... some other stuff.
They ARE however, fully eligible to give me the all information that I need - because I'm good like that.

YODA'S DEEP THOUGHT OF THE DAY...

blurtlife blurtit blurtfunny blurtnews
12 days ago by lucylin
395.70 BLURT
20 votes $4.23
24
Authors get paid when people like you upvote their post.If you enjoyed what you read here, create your account today and start earning FREE BLURT!
Sort Order:
[-]
world-travel-pro  ·  12 days ago

I'm a big fan of your deep penetration! Keep up the great work you smelly Penguin!

I refuse to par-ticipate as, A you finished, climaxed with deep thought, not deep throat, and 2, because. Oh and 3, I am turning my yard into a gold course again, because I am bored, and can.

I thought you might be able to help out on the inomy > wallet thingy...oh well....Go and make some holes to put your balls in...

By the way, I said gold, not golf!

I was distracted by your balls...

If you stop looking at my feet, you will not see them anymore!

Now I am going to have to sue you for malicious intent as I know after reading your posts, you meant my balls in my under garments, you just send it there, to the wallet, you generate the code online while there, go to ionomy, choose blurt wallet, copy the wallet address, send to it, you tard. You welcome. 😂

....i tried copy pasting in my wallet address (in the window that pops up in inomy)...pressed send - nothing happend for thirty minutes or so - so cancelled it - the tokens hadn't moved.....

OK Mr tard, there is an issue on this site, it was written into the original steemit code, and none of the tards on here can be bothered to fix it, sometimes you have to do things twice, to get it to work once.

First of all, let me thank you for giving me the respect is so richly deserve...

Now....I open up my inonmy 'send' window - the same window I would use to send to blurt to my blurt account here , (using @lucylin name instead of my ltc addy, obviously ) > I paste in my LTC wallet addy in the said window > I press send > then I press send (again)...

Indeed yes, well done, you get a grade A.

Had some interest in those jobs ,.. but the sign said ,..
Long haired freaky people need not apply ...
That , and some unpleasant vampire stuff coming with such function .
The 5 blurt is still tempting do ,.. but i see no way to con myself in to such crypto guru code is law wizard ,.. could fake it , hide the trades with smelly coin's from the demented penguin , but it smells fishy ,.. so would probably be impossible to do .
Now i heard that the Murkymurk , who carries the smell of rotten fish already for years now , might be looking for such great job opportunities ,.. the perfect candidate for this career move your offering . ;-)

Still , sound on GIF's ? ,... just sound , like a .WAV file would be great for me ,.. @blurtmusic could then take off big time for example . And there must be a way to have a WAV and GIF play and stop under one command of code in a blockchain somehow .
Damn i need my own office crew now ,... ;-)

...I found a website where you can put audio to gif - but then i got stumped - and then realized (before I bothered to investigate further), that if blurt doesn't support whatever file it might be - there's not much point.
Easier to ask here, and pay 5 blurt to my new, very temporary, employee...

As we can only upload pictures to a post ,.. this tech might work for uploading sound ,.. it might need a browser extension to really work do .

It seem's to be a pesky bug that still pictures have taken a dominant position in ways to communicate information on this high tech code driven network ,.. or do we need to enter the muta-verse for such tech and goodies as we are seeking for ? ,.. for please no ,.. i have no interest in a live size virtual penguin chasing me around some imaginary desk .

I do not think it will be possible to hear any audio in gifs, however I think it might still play the gifs video feed loop even it had sound. Otherwise for now, video links would have to suffice...

Or howver you want to go about that. But as far as I know, gif and sound is not possible right now. It's lacking that function.

@tekraze will be able to explain more.

Gifs were just meant to display low-quality animation slideshow and can not support audio. If someone wants audio, then one may try converting to new webp format

yeah, I just tried uploading a gif (with audio) onto blurt (from gify)...wouldn't upload.....bugger...

...I found a website where you can put audio to gif - but then i got stumped - and then realized (before I bothered to investigate further), that if blurt doesn't support whatever file it might be - there's not much point.
Easier to ask here, and pay 5 blurt to my new, very temporary, employee...

"Don't call us we'll call you"

They never do unless you find a new job months after. 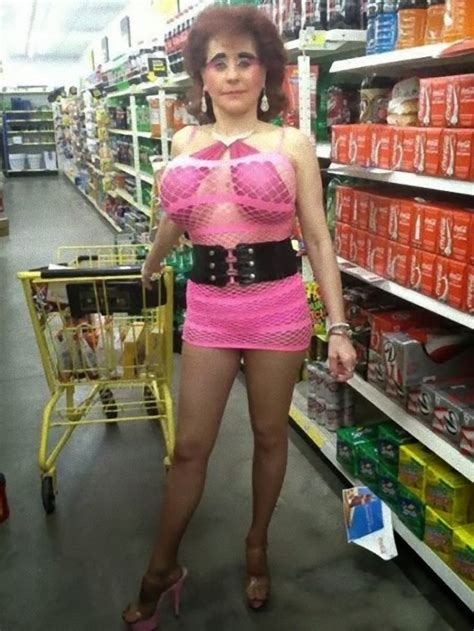 ....You still have food on your shelves !