It's one in the morning and my alarm is ringing. I feel absolutely terrible: I've slept for an hour and a half and the evening glass of red that was supposed to help me sleep faster and deeper is still fermenting in my stomach. And I don't know what makes me sicker. Well, let's face it: conditions are perfect for climbing Spain's highest mountain (and supposedly the world's third highest volcano - if you count from the ocean floor, of course).

Well, at least he's not sick (at least for now, ha ha), because he has enough energy to prepare us both not only snacks, but also coffee. Shortly after 2 am, we get into the car parked by the ocean and drive towards the National Park. The drive up takes us about an hour. There is no one anywhere, and we don't meet a single car on the whole way up to the caldera. Because what would they be doing here, right? 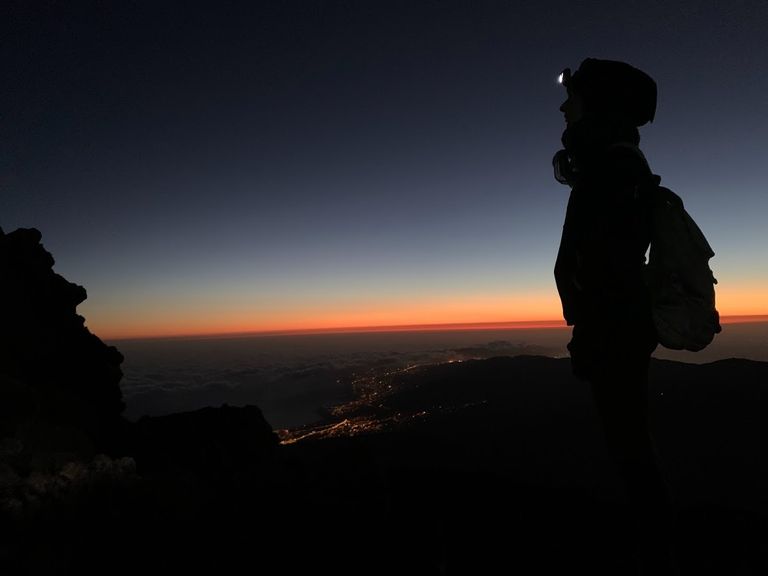 Up in the caldera, it turns out that there are more crazy people like us, only they came from the other side: the small parking lot at Montaña Blanca is completely full. So we go back a few hundred metres and park on the side of the road. A bit of a pirate move, but we have no time to waste. Normally, I already get a headache here: when you change altitude from zero to 2300 metres in an hour, it gives your body a bit of a workout. But maybe I am so numb from the lack of sleep, or maybe the adrenaline is buzzing inside me, but this time my head is not spinning or hurting. Maybe it's like she knows to save it for later. It's hard to tell at what stage of the climb we decide to take a break, but I suspect it was at about 3000 metres above sea level. It's still pitch black, but my muscles are screaming for a bit of energy (especially after not even eating "breakfast" at 1 a.m. due to an upset stomach). So we sit down on a rock, unwrap protein bars, and turn off our headlamps for a bit. Suddenly our only companions are the slowly fading wind, the stars in the sky and the lights somewhere down below and in the distance in the east of Tenerife and the west of Gran Canaria. And soon it will be cold, too. Only now do I feel that it is a degree below zero. So I don't let my muscles get too stiff and frozen and we get on the road again. A little while later, I almost crash into the hut. I'm serious 😂 as I focus on just a few stones in front of me, and it's still pitch black, I don't even notice that we've reached the Altavista hut at 3260 meters. I'm happy about this, especially after I'd misremembered its location (I was under the impression it was around 3500 m so I'm overjoyed), but either way I'm quite encouraged. Especially when, moments later, an orange streak appears on the horizon and widens very quickly, glowing more and more, bathing the rocky mess under our feet in a pinkish light. Here, in these places, I smell the stench of rotten eggs for the first time and rejoice that we are approaching the summit. Which is true, but when the peak finally comes out from behind the rock, it's still some 300 vertical meters above us. Ugh. I feel like I'm drunk, my legs are spinning and I'm tripping over things that aren't even on the pavement. My head is pounding, I need to breathe twice to get one normal breath portion of oxygen, my stomach is starting to churn again and I feel like Frodo climbing into Mordor. We meet people already walking back, and they try to cheer us up with words: "just 15-20 minutes and you're there!" Let me tell you, telling someone on the verge of collapse that it's 20 more minutes of the worst terrain in the world is the worst thing you can do 😀 You want some advice? Absolutely don't walk back down after you've just gone up! 😂 The sun will be beating down on you, your feet will be dizzy, you'll slip on rocks and gravel, you'll probably run out of water (even though you had 5 liters), magnesium won't help you anymore, you'll get heat stroke, you'll almost pass out half a kilometer from the car and then almost fall asleep behind the wheel on the way back to Puerto. blurtbooster
9 days ago by mohammadfaisal
0.00 BLURT
$0.00
0
Authors get paid when people like you upvote their post.If you enjoyed what you read here, create your account today and start earning FREE BLURT!