The Dow Jones in My Mind 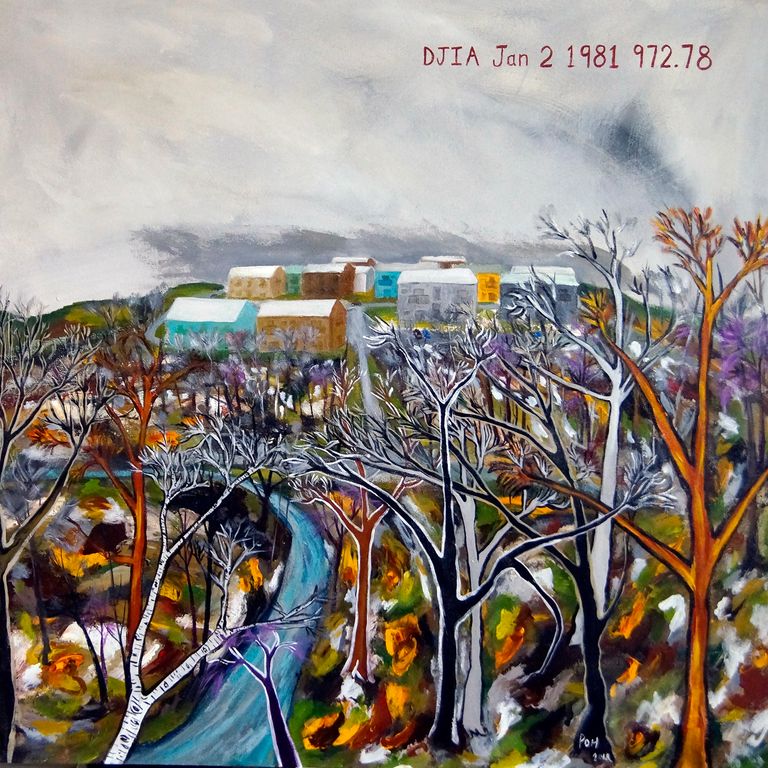 National Public Radio® thinks the status of the Dow must be bull-horned every hour on the hour, else people will stop driving their cars and fall out of them onto the street. President® Sociopath uses it to mark his triumph as a bootlicker to more successful imperialists. Everyday I pray to Pan that its average drops to the single digits, so mother earth can lick herself clean, and perhaps decide to give human beings another go at living on her back skin.
This week the Dow burped and lifted my spirits. Here are two paintings from my series on the capitalist’s deranged indigestion. I hope and pray that Monday brings a sharper decline of the kind that actually might set up a vena cava road block on Warren Buffet’s multiple potholed cardiac super highway, or find a frat boy pervert Zuckerburg tearing his own face off in the mirror. What a dream to finally see a steady stream of Chinese corporitos screaming off bridges, and my local Congressman® losing all his crony capitalist funding quicker than a fly barf on a rotting pile of weapons industry CEO suicides.
The NPR® announcement comes every hour to remind us that the dark forces are under control. If one likes horror stories, he can delve deeper into the blackness and measure individual company ups and downs on the Lifehate® meter, via CNN Money®, Marketwatch®, The New York Times®, or his or her own secret hush money on-line portfolio (401K means 401,000 species closer to extinction).

I dream a familial human economy (with access to antibiotics) close to the lifestyles of rabbits in their warrens, instead of all the rabbits dead and my portfolio achieving the best underwater condo in South Florida. It’s my dream. It can be as crazy as yours without the lace underwear.

I made this painting the next week, while the Dow was dropping satanically, 666 points: 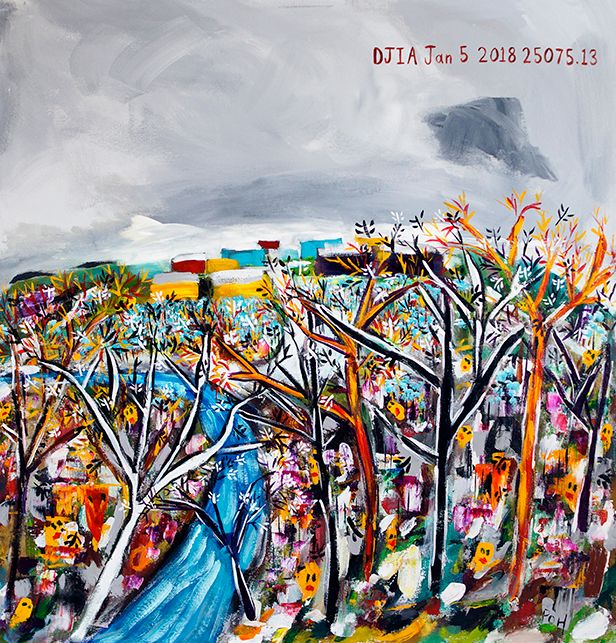 The two are of the same vista. The first painting is a sylvan scene in my memory when the Dow was reasonable and I was a boy dreaming of a just and fair society. God, I remember back then, (1981), my parents thinking the world was ending they had it so bad, and yet, in hindsight, the Dow was just a gleam in the eye of the total global domination monster it is today.
The second painting is of the Dow in 2018 climbing to remarkable, unexplored heights of Chinese Plastic Crap Mountain. (Today it’s riding a Jeff Bezos penis rocket to the tip of Moon mountain). I made this scene more fuzzy and a bit frightening because I believe that time and the repetition of status-keeping, money hoarding, and career-building makes adults so stupid and afraid of practically everything that they begin to see the strangest demons climbing out of rabbit warrens.
Privately, every dollar we keep in the Dow is just a reminder of death around the corner. Publicly, its existence is our human being account sheet delivered to Pan’s desk at quitting time.
Most of America ate dinner in 1981. Americans still eat dinner today. What has changed? Two generations of coddled babies in their cribs make for terrible activists of revolution that needs to happen. Too many parents are dreaming that arbitrary wealth acquisition is the best way to make a living.
So I hope and pray Pan makes the rich economies implode. Because few human beings think to knock the Dow Jones propagandist out of his chair, I must call providence to action. I still dream like the child, who never dreamed about money to suddenly appear and make the world go away.
Compare the paintings together and see—the living future is the living past, more or less, no matter what the numbers tell you.

blurtart blurt blurtlife economy dowjones art
2 months ago by ronthroop
317.57 BLURT
6 votes $1.08
0
Authors get paid when people like you upvote their post.If you enjoyed what you read here, create your account today and start earning FREE BLURT!