Blurt Blog Keeps Going Down And Can Find No Explanation Why.

practicalthought in blurt •  2 months ago  (edited)

I've noticed over the last 24 hours that Blurt Blog has been down a lot. I get that things happen, but what is concerning to me is once again there is a lack of communication as to the why. In fact, I see nothing anywhere indicating there's even a problem.

I normally wouldn't write a post like this, but it bothers me that given the recent issues we had and the acknowledgment that Blurt needs better communication, that in a roughly 24 hour period of issues I can find no communication that anyone other than myself is aware it is happening.

Yesterday I didn't think to take screenshots, today I did spread three hours apart to show it obviously is not just myself. 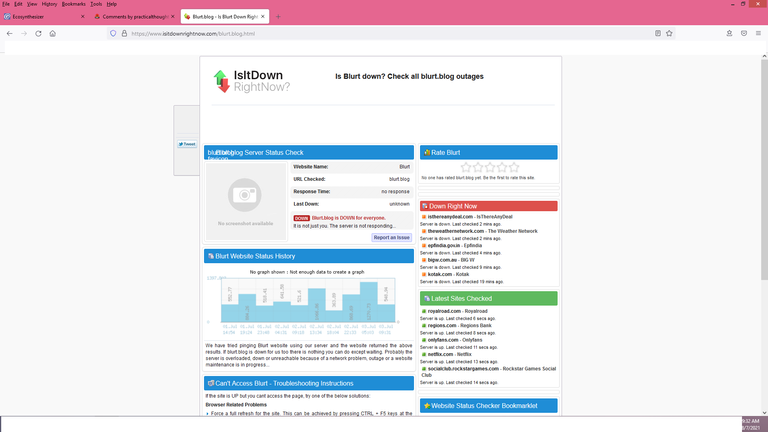 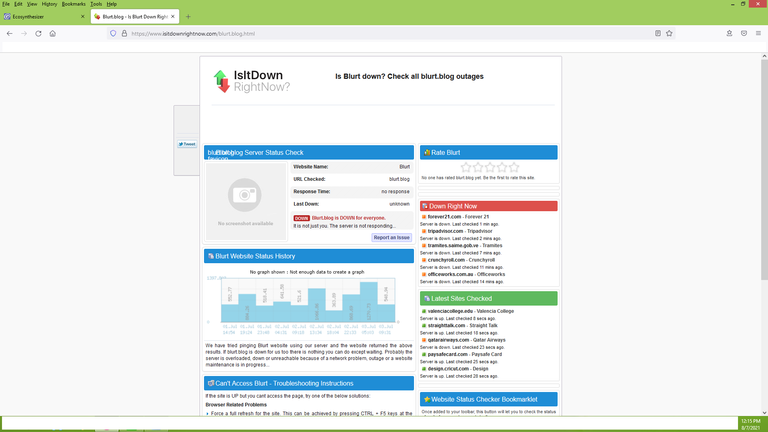 I think it's prudent as mentioned by many in the past that we have a communication line as to issues when they pop up with the user base. I've had to explain several times to others on the fence about coming here why the front end I recommended suddenly is no longer a front end.

I understand that there is a limited number of folks coding, but it's been an ongoing issue now for 24+ hours and it seems that would have been plenty of time to spend 5 minutes or less going to an official channel to let us know what might be going on.

I hope that perhaps an examination of the process of notification can be made here and implemented. It gives Blurt a bad image as well as those of us who try to bring others here when things aren't working and no one seems to know why.

I would love to see many come here from the other chains, but the couple of times I've interacted with just such a reason there is always something wrong with front ends and overall it hasn't been conducive for my convincing others to coming and staying.

blurt blurtdevelopment community issues communication
2 months ago by practicalthought
1,980.19 BLURT
28 votes
11
Authors get paid when people like you upvote their post.If you enjoyed what you read here, create your account today and start earning FREE BLURT!
Sort Order:
[-]
double-u  ·  2 months ago

Hi, I don't like to use Discord.
But for such cases with disruptions Discord is a very fast source of information.

As far as I could tell, the downtimes were not predictable. But it's true, if something is done with the probability that the frontend goes down, it should definitely be announced.

But I hope we stay online and can do it in the background, the frontend can be tested locally before the changes go online.

What we can't control is if a rpc server (for whatever reasons) produces errors, then it can take some time to notice and fix it.

Thank you for weighing in.

I lean towards the idea that as sporadic as the issue began as, that as it worsened over a 24 hour period of time that it was not only possible, but prudent to inform the user base and potential user base that the issues were known and being corrected.

I've had issues bringing over others from Hive because of these continuous problems that are exasperated by no one seeming to know what's going on. I was ridiculed on my post at Hive because right after I made it none of the front ends were working. I had nothing to tell them as to why.

I managed to bring a few people over despite this, and they have dropped off. The last one, whom I was most ecstatic about has questioned me several times now over Blurt front end issues, and the last time we lost yet another front end he was weeks before asking me on Hive why he could no longer log in.

In my opinion, some of the bad will we have from bad word of mouth elsewhere is compounded because when the many issues pop up folks like myself are unable to explain what is going on. It's difficult enough to try convincing others why they should spend the time to come when the payouts and coin value are so much less, but with so many issues taking place and not knowing the why makes it more difficult.

I understand issues happen, but it seems we create some of these issues, such as allowing ignorance to take place.

Some of this is exasperated for myself when I see some of the longer term users also abandoning us. An example of this would be Cryptopie. I've been worrying something ill befell him for a couple of weeks. Needing to know, I peeked at Steemit which I never do like I do at times with Hive. He is there posting regularly. I don't know if he just stopped trying to search for the new way to access us a month ago when we lost Blurtter, or he just decided it wasn't worth his time to post here and/or at least let us know his health issues had finally taken him.

I want Blurt to succeed, I believe the philosophy behind it is much more sound that the Steem/Hive models. But we have many obstacles that begin with lack of funding the others don't have. It seems we add to this burden by some of the lack of structure here.

Sorry so long winded. I'm very passionate about wanting this to succeed and if we keep making people jump through hoops to participate or join because they are left to guess why the hoop even exists we will continue to sabotage both the birds in hand as well as those who might have come.

@cryptopie's absence was felt here too.

Yes, I totally agree with you, possible outages need to be announced. What I did notice was that the frontend was very slow for a few hours last night. There was also a problem with the image server, but Saboin fixed it very quickly. Maybe it was regionally different, hard to say.

Thank you for your detailed comment, it reminded me again of an idea to make our frontend more stable. For that I just published this improvement on GitLab.

Very good afternoon, indeed the price has decreased drastically, I do not know what are the causes or reasons for this situation, I do not know if it is due to some speculative movement in the market, price correction or just that our currency does not arouse any interest to other investors. but whatever the reason I hope there is a recovery soon.

My apologies, my title wasn't as clear as it should have been. I added a word to it so as to avoid the misunderstanding again. By going down I meant Blurt Blog, and added my screenshots from an independent source to show it wasn't just myself it was going down on.

The price is mostly a separate issue, although if we could shed some of the bad publicity we have it would help mitigate that image.

I do not know if it is due to some speculative movement in the market, price correction or just that our currency does not arouse any interest to other investors.

Yes to all of that. Sadly, much of the action of Blurt in the limited areas it trades is from those who lead us here making sure the price point stays above certain levels. I could make the argument that all of crypto operates in this fashion, only just less noticeable because of the vast sums of money used draws in a lot of third party money.

This was noted here in an exchange on Hive regarding Blurt just 2 days ago.

I believe that perhaps recovery is the wrong term. So far Blurt has not really caught on with many, and several who gave it a shot have abandoned this for greener pastures where there appears more liquidity and stability and rewards.

None of which is intended to denigrate Blurt in any way. I believe in the project, believe in Jacob. That's why my entire crypto holdings are here behind him. Like Jacob I put all of my effort into what I wish to see manifest, although he has so much skin in this project and continues to as he does what he can to keep this going.

I believe his bid to move us to Cosmos is just such a maneuver. Dex is the way of the future, as with the government controlled exchanges one is at the mercy of pay to play as well as world players (whales) who use crypto as an extraction machine just as they do normal everyday commodities.

I believe once we move to Cosmos everything will begin looking up as our project should see an increase in perceived value. This will help with many things such as drawing more users, lightening the financial burden placed on the foundation right now as well as possibly allow them to begin seeing profits. Opening us up to so many programmers and other projects will see us become what for now it seems we can't.

I appreciate so much those of you who have skin here, and continue going the extra mile like yourself in witnessing what has been a very rocky road. My contribution has been a small monetary investment (large for me though) coupled with my pure dedication as a platform. I'm drawn to do so because of the others like you who continue to make the sacrifices now so that in a future tomorrow we will see the rewards manifest.

I believe in the project, believe in Jacob. That's why my entire crypto holdings are here behind him.

I needed to hear that again.