The difference between blurt blockchain and frontends ! 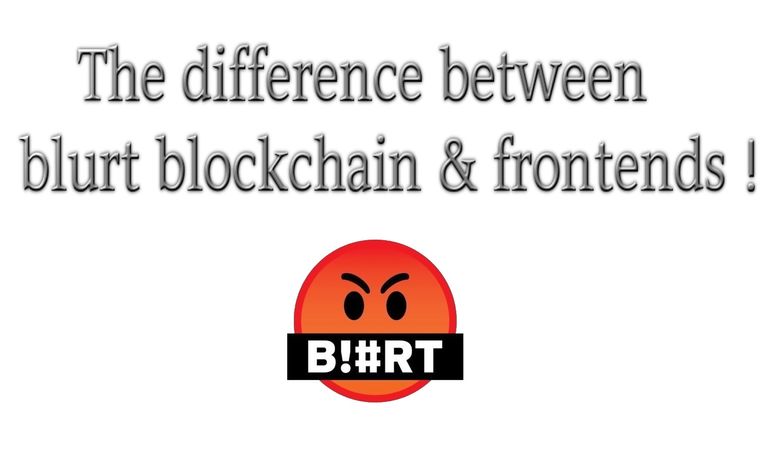 Being on the graphene blockchains for 5 years, I will run educational series about what I know about these blockchains.

And one of the most discussed topics was the fight of abuse in blurt and how it should be done. People were discussing what should be considered an abuse and what shouldn't, especially in a blockchain that support freedom of speech. After all you can always read FAQ and learn about that.

Many of us who are here for long enough think that things like ''The difference between blurt blockchain and frontends !'' are clear and nobody need to explain that. But, I think we are wrong, we have people here who've never seen a blockchain before. People joined from the real world, from other social media, so for sure they may don't know about all this.

So, imagine a blockchain like a very big building. And this building is full of apartments, and in each apartment there are rooms. For example, you enter the apartment number 1 what's called blurt.blog. And the owner of this domain will not allow there some topics to be discussed. But in the same apartment there are rooms where people are already living, and they didn't like the rule of the owner. In this case the owner have to have a deal with them, where they may accept those rules or not. But someone else prefers to go to another apartment and that's blurt.live. Where they may have others rules. So, he/she is free to go there and live with the rules he/she likes.

Now let's talk directly about what's a frontend. In fact is a website where we all share information, posts and comments and this frontend, or it could be called an application built on the top of the blockchain. So, the information you share here it will always be seen on the blockchain if you look for it using blurt explorer. For example : ecosynthesizer.com. So, the explorer will always show you what's posted on the blockchain. But the frontend could hide that depending on the developers who're leading it. So, in case something is hidden on a frontend, it doesn't mean that we can't find it in the explorer.

And talking about decentralization and how people may don't understand it well, I would say that the explorer is totally decentralized where no one is able to delete any information or hive it, and the frontend could be a bit centralized based on the rules set there. But it doesn't mean that no one is able to create another frontend where he/she can allow what ever he/she wants, and prohibited what ever he/she wants.

That's why the perfect solution for all this issue between those who fought about this issue is creating a new frontend for those who consider freedom of abuse is ok.

And it seems if someone is ok to run such frontend, he/she is welcome to do that.

After all I'm not a developer and I'm sharing this based on my experience.

Please correct me if I'm wrong.

You can also read the following comment I wrote recently under [this post](Property Rights, Coal And Other Blurt Conversations) by @practicalthought :

I also believe that there are more important rights than the right of freedom of speech. Right of living, right of moving, right of doing what we want and many many others. As well, very nice mentioned about the platform or frontend. The owner of the frontend also has the right to do what ever he wants with it. It's impossible I guess to delete, edit, or hide on the top of the blockchain. Recently I was thinking what is a front end will be create where we don't see the rewards. People also will say that they have the right to see them ? While it's all on the top of the blockchain. Maybe this what confuse people. In the future many many applications can be created, and it's up to the owner to accept things there or refuse them. Let's say someone decided to create an application where only videos will be seen, without descriptions. Or only certain types of videos, let's say about gardening only, so if someone will come with a video dancing, and will not be accepted also will say that's his freedom of speech is hurt ?

Anyway, I personally think that freedom of speech has limits. Especially in an international community. It's not accepted for me for example when someone makes fun of accents, or insult people. I wouldn't create such a platform where that will be accepted. I understand now why @ctime gave that solution..

Maybe we need to place there some educational videos about the difference between the blockchain and frontends. For example in the main welcoming page when people join.

blurt frontend abuse blockchain freedom
last month by clixmoney
167.77 BLURT
16 votes $0.58
0
Authors get paid when people like you upvote their post.If you enjoyed what you read here, create your account today and start earning FREE BLURT!