If We Can See One Another Maybe We Can Stop This Before It Gets To Far To Stop.

practicalthought in blog •  2 months ago  (edited)

In much of the world, especially the United States, there is a push to demonize those who refuse to become a medical experiment.

Despite the many world renowned experts who have warned about the dangers of their experimental Gene Therapy (manipulation) such as ADE and the myriad ill side affects that are also already beginning to be seen up to and including death from the jab.

Calls now are being made to force those who refuse to be part of the evil injections to be forced to leave society to worse, being rounded up and forced in to camps.

This image is just some of the headlines we see here in the States. 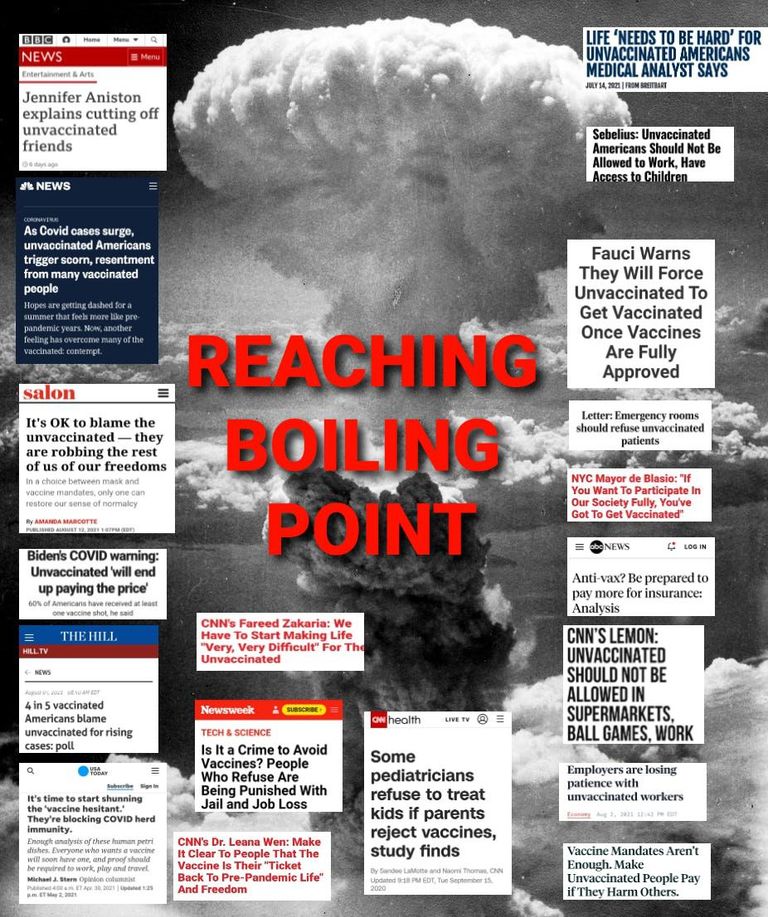 In many threads online, I see many arguing those of us who refuse this injection are murderers, that we deserve to be shunned, or worse, to die.

Sadly, despite the overwhelming evidence that the injections do little to help in this so called war on Covid, there is evidence that preventatives that are cheap and effective DO work.

It's Frightening How Easily Many Are Led Into War By Those Who Are Proven To Have Ill Intentions.

As one who used to enjoy reading history, I sometimes wish that others enjoyed it as well. Then they could see how the same formula is used time and again to begin wars and terror campaigns against those the perception masters have targeted as next.

I often think of how mislead many were regarding WW2 as an example. Germany lost that war, but the leaders who instigated/agitated the masses didn't.

I don't think many are really aware that Hitler for example lived out a natural life, which was known to intelligence communities around the world.

Many of the scientists who were reputed to have been conducting inhuman experiments on people were brought to the States to CONTINUE their experiments. They called that Operation Paperclip.

There have been many experiments since conducted on Americans by their own government without their knowledge and consent.

One of the more infamous was the Tuskegee experiment that saw the government trick African American men into thinking they had been treated for syphilis when in fact they hadn't, so they could measure how the disease would spread within the African communities.

Sadly, that is just the tip of the iceberg.

I could spend hours providing more examples they are so numerous. Also numerous are the high amount of suicides that have taken place by those who became whistleblowers. Or strange murders of them, just as we see taking place now with leaders who have taken a stand against the Covid injections for their countries being assassinated or "suddenly" dying.

Given The Track Record Of These Authorities, Its Sad How Quickly They Can Still Turn Others Against One Another Through Causing Fear and Hatred.

Especially when the common sense screams they lie. For example, this article leaves me speechless, as do so many of the articles so many seem to be falling for.

A woman’s fully vaccinated father died from COVID-19, with her saying she “can't imagine how much more he would have suffered if he had not gotten the vaccine.”

I'm not really sure how much worse it could have been after dying like that.

These type of stories are everywhere, and they are creating a division of anger and fear between us as they set the stage for yet more war and bloodshed. They even have been preparing legalities to drag those who wont get injected off to camps.

Those who have taken their injections seem to have a hard time understanding that the new variants that they say are more deadly would be a DIRECT response to the injections, not from those of us who haven't gotten them. Accepted science before this was that viruses mutate to become weaker so they DONT kill their hosts.

Of course with the upcoming likelihood of ADE that world renowned epidemiologists have been warning of with these injections, I fully expect them to blame non injected people for these deaths that will be coming far to soon as a result.

I saw another liken it to blaming those who refuse antibiotics for being the cause of antibiotic resistant strains that have been emerging these last few years.

If You Tell Me You're My Enemy, I WILL Believe You.

As I saw 5 years ago when Hillary Clinton called half the nation deplorable, I see it taking place now with these evil injections. Only with more bite and promise of bite against those who are supposed to be hated and feared.

I wish that people could pause, SEE who it is that is telling them to fear me. See their past track record when it comes to CARING about people and being truthful. These are the same people who conduct experiments on us, force pollution on us, force wars all over the world as they strip resources and kill so many.

Through manipulating folks into fearing and being angry they are able to turn innocent people who are neighbors in the world into savage killers wishing the death of those folks who have done nothing to them.

It's so sad they get away with this again and again. History is a record of their doing this, despite their writing it from their perspective with their spin. Especially recent history when we can all clearly see they don't care about us. If they did they would have tackled the many other health issues that plague humanity that causes far more deaths than this.

Once you exclude the deaths of those who died from other causes, there really hasn't been many deaths compared to other problems that take so many lives.

I think many of us don't want this war that is being pushed. But the corner is getting smaller with calls to take the entire corner from us.

If you make those of us who refuse the injection jobless, homeless and unable to legally purchase food, you HAVE declared a war.

Insist we are the enemy then don't be surprised when the war comes to your door. We aren't some strangers on another continent as so many have grown accustomed to. We are your neighbors and live in your cities, in your neighborhood and on your street.

So I hope that before this map of criminalizing those of us who refuse to be injected sees fulfillment, that those who insist on this path now through manipulation by the evil perception masters will be able to pause and take a breath.

And in that pause SEE me, and that I'm not who it is they should be frightened of.

blog community life notyourenemy wedonthavetofightforthem
2 months ago by practicalthought
962.17 BLURT
13 votes
4
Authors get paid when people like you upvote their post.If you enjoyed what you read here, create your account today and start earning FREE BLURT!
Sort Order:
[-]
rycharde  ·  2 months ago

I have always maintained that ignorance is dangerous - and most dangerous to those who are not. Now we see how this happens.