Who will play in Shakib's all-time IPL XI

Shakib, the hero of Bangladesh's countless victories, has been selected as the best IPL XI of all time. Shakib, who played for Kolkata Knight Riders, has some surprises in that XI.

Shakib Al Hasan, one of the best all-rounders in the world and star of Bangladesh, is now playing in IPL in UAE. The Kolkata Knight Riders all-rounder has been selected as the all-time best XI in the IPL in an interview with Sportskida, an Indian sports news outlet. 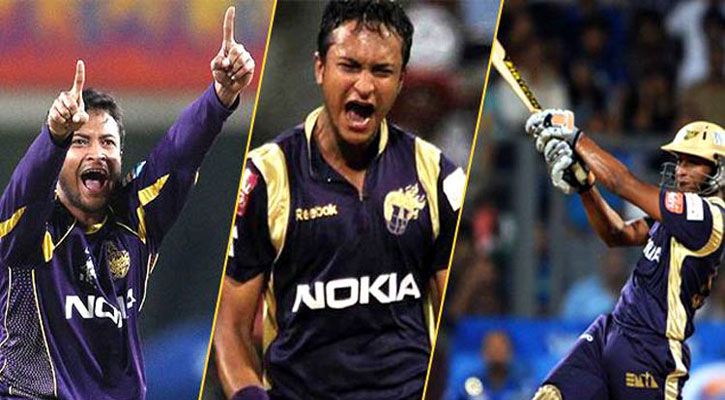 In an interview given to an Indian sports magazine on Saturday, Shakib made this XI. Although four players could play in the foreign quota in IPL, Shakib has kept three. Chris Gayle, known as the 'Universe Boss' for T20, was not included in the XI. Only Gayle why there is no Caribbean cricketer in Shakib's XI. AB de Villiers was also left out of the XI.

Shakib's big surprise in this team, he did not keep the T20 superstar's AB de Villiers and Chris Gayle. Besides, four foreigners have been included in the XI, but two-time IPL winner Shakib has kept three, that is, six Indians.

Shakib Al Hasan, one of the best all-rounders in the world and a star of Bangladesh, is now in the United Arab Emirates to play in the IPL. In an interview with Sportskida, an Indian sports news outlet, the Kolkata Knight Riders all-rounder was selected as the all-time best XI in the IPL. Although four foreigners could be included in the XI, two-time IPL winner Shakib has kept three, meaning six are Indians. Led by three-time Chennai Super Kings champions Mahendra Singh Dhoni.

Shakib's XI includes two all-rounders Ben Stokes of Rajasthan Royals and Rabindra Jadeja of Chennai. There is no specialist spinner in his team. Three pacers were Lasith Malinga, Yashpreet Burma, and Bhubaneswar Kumar.

Shakib has four Chennai Super Kings' Suresh Raina. Chennai skipper Mahendra Singh Dhoni will play in five. He has been given the responsibility of captain and wicketkeeper of this XI.

Lokesh Rahul will play six in Shakib's XI. Chennai's Rabindra Jadeja is the only spin all-rounder in the XI. Jaspreet Bumrah and Bhubaneswar Kumar are with Lasith Malinga in the pace attack of the XI.

bitsports sport blurtsport soccer blurtcontests
last month by shariarahammad
78.41 BLURT
5 votes
0
Authors get paid when people like you upvote their post.If you enjoyed what you read here, create your account today and start earning FREE BLURT!