I talk a lot about how little interaction there is here on Blurt. I believe in large part due to two factors.

Due to a recent event that saw a large amount of stake delegated to me, I would like to try something to see if we can get engagement up. I'm starting a weekly challenge where I pick a topic I would like to see written about.

The topics are designed to be interesting, and hopefully some of you will find it to be as well and choose to participate.

Despite the large amount of stake bequeathed to me for now, I also can see that if this idea works it could be taxed greatly so I need to put some rules in place.

** Edited to add, as I was correct on my ignorance being lifted as my experience grows.

If this idea works, there might be more rules in the coming weeks. I've never tried a challenge before, and in my ignorance could be overlooking many things. I figure it was best just to get the ball rolling and tweak it as time goes on.

I thank you for any interest you may have, and am hopeful that as the weeks go by if this gets participation, we can begin seeing more posts with robust comment sections as we get to let our hair down and have some fun while learning more about one another.

To get this started, I'll now share what I would do if I were the dictator of my country.

If I Were The Dictator Of My Country

One of the first things I would do as dictator is break up some of the monopolies and place that power and responsibility in many cases local as they should be.

This would focus initially on large land ownership by corporations. Despite being a believer in private property rights, allowing large corporations to own a growing monopoly on the land is detrimental to the real people in the affected areas. It drives prices of property out of reach for the average person, as well as gives the monopolies over food to these same corporate interests.

I would set up programs that would help local communities learn to become more self sufficient in growing their own food, perhaps even going so far as to take some of the already nationalized land and converting some of it into localized community gardens that would be a place to teach agriculture as well as help ensure those less fortunate have access to healthy food that is not tainted with genetic modification. This would ease the real struggle so many have of being able to provide a healthy diet for their families. This food could be free of monetary trade and instead could be one of equity trade. You help maintain the garden, you eat from that garden.

I would demand an overhaul of the education system. In its current state it demands everyone focus primarily on meaningless skills that most are ill equipped to excel at, as well as designed to be boring. Education would become a system that focuses on:

I would outlaw corporations as having the legal designation as being a person. Corporate rights should never hold the same or more standing in our community as people do. We’ve seen an erosion of human dignity and quality of life as these corporations have grown to dominate the justice of our communities. Corrupting them to where they are above justice.

I would hold all persons from the current corporations liable for their directions that harmed and killed people with blatant disregard in their pursuit of money over people. This also would be extended to forcing work conditions to be humane. In the current climate of corporate efficiency, working conditions and the quotas associated with them are not healthy to families and individuals.

In this same vein, I would dismantle most of the current prison system. It would no longer be a for profit venture, no longer be the loophole that has allowed slavery to continue in my country. The first part of this dismantling would be the release of all people who were found guilty of victimless crimes.

There is much violence in many of the more impoverished areas of my country. Often one sees it along racial lines. Unlike the current pandering we see from politicians who pretend to care as they pass laws designed to exacerbate the problems, my approach would be different.

The violence would no longer be allowed. To help reverse it, real meetings discussing the very real grievances would be held. Empowerment as I mentioned above for local communities would be tailored to address these real grievances, as we explore returning dignity to these impoverished areas. The days of their extraction and forced impotence would come to an end.

I would withdraw the military from most of the world, demanding a stop to being an empire under the pretense of policing the world. Those resources would no longer be wasted interfering in the doings of other nations. Most of that money borrowed to finance.

Speaking of financing, the international bankers who hold ownership over the creation and maintenance of the economy would come to an end. The nation would once again control and create the money supply, and it would be tied once again to real goods such as metals and possibly other commodities. I suggest other commodities so that there could be an elasticity to the supply as the needs of the nation demand, without it just being created backed by nothing.

I would do away with most taxes. This would obviously affect things for those who have been enslaved by the social net programs that so often lead to many making damaging choices for themselves and their families. Working with local leaders, we would find a way to transition these people into being productive and learning they do have value and skills that make them a unique and worthy person.

In many cases, taxes are simply outright theft. Stealing from one table to place on another in exchange for a sacrifice of free will and dignity from those it is given to. And in the larger scheme, it so often is funneled to the monopolies I would do away with aiding them in their conquest of the community.

I could go on, but this is already over 900 words.

I hope there will be participation in this challenge, and more so that it will produce some interesting comments as we share what we would see change for our communities and nations. I look forward to reading your posts and comments.

Nice post. as a dictator, you need have a high mental ability and a good personality. I like dictator...

Here is my post for the Dictator Challenge …. https://blurt.blog/dictator/@offgridlife/blurtmusic-holiday-playlist-national-chop-suey-day

Your post has been disqualified. It comes across personally as not only low effort, but an attempt to go out of your way to let me know your displeasure with the challenge as I've set it up. I will elaborate. First a pic where in your own words you explain why you chose to be disqualified. 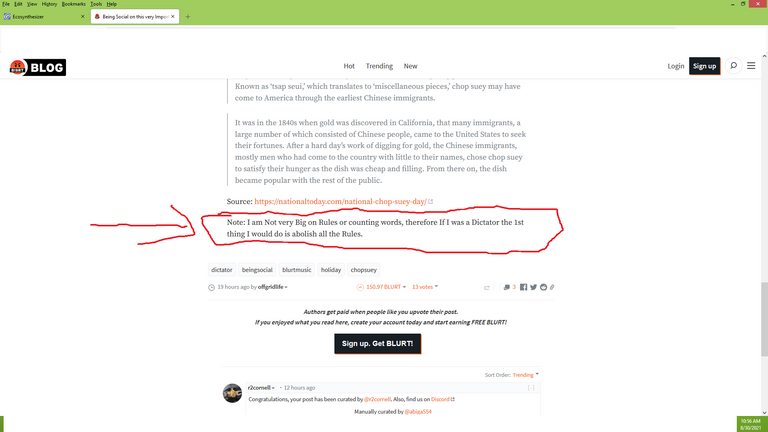 You certainly exhibited this dislike of rules you mention when adding all the words together the post with title and everything comes to only 517 words. To further exacerbate this, well over half of the words are copy pasted from the link you referenced.

I'm going to refrain from stating some observations I've had for some time as we're all entitled to the freedom to post what we want. My speaking up now would be solely because I'm discouraged in a hurtful way that you willfully chose to add what I consider to be largely a lifeless post while subtly denigrating the challenge itself.

Please don't bother responding. I've no desire for a tireless back and forth. There are many good things you do for Blurt, and I would see no hard lines between us, no matter how different our views and approaches are. Overall I appreciate your intent despite these disagreements, and harshness between us would not serve either of us, nor Blurt itself.

I'll continue to have rules, adding some as I did moments ago as I see if this challenge can serve to stir up interest and passion within the Blurt community. And by extension, act as a draw for outsiders. I ask that you please look elsewhere if you find these rules and the intent to be not to your liking, as I do with so many of the posts I see here at Blurt.

I wish you continued success here, and agree with one thing you made mention of on your post. With diversity it offers multiple areas for a foundation to be built. It's ok that we are such diversity, you and I. It doesn't mean we need be at odds with one another, it means there is an opportunity for us to offer such different foundations.

Sorry about all that. I have a strange sense of humour but I am used to being disqualified for not following the rules. It’s like getting 3 wishes from a Genie lamp and My 1st wish is to always have an infinite number of wishes. My post was meant as pure humour … with the idea of being a Dictator ,… as Dictator my 1st Rule would be to abolish all the Rules. I’m sorry If have offended you in any way.

This surpassed anything I imagined. You turning it into satire made a good idea into a great one. Thank you so much, it's an honor to have read your writing from the lighter side. I've reread it several times and it makes me smile and laugh every time.

This has been one of the contests I have enjoyed the most, mainly because it encourages creativity and secondly because it is a way to promote better content for this social network. Thank you for having elaborated this publication.

What’s the best way to count words on a post ???? Count the number or words in the 1st sentence then multiply by the number of sentences?

I often use Office to write out my posts before copy/pasting it here. It helps me somewhat with spelling errors while giving me a word count. Unfortunately it does little to aid me in my run on sentences. When I was self publishing I would employ using a text to speech to read it back to me so I could do finer editing such as hearing run on sentences. I don't know if my free office has that feature though. I stopped using Microsoft Office a few years ago when their terms changed to allowing them to record and analyze everything I use their product for with their ability to shut down the program if I was in violation of any of their "standards" that could be ever changing.

I look forward to reading what you would do as dictator. :)

Great idea for a writing Challenge. The world needs more dictators like you !

I am entered in this contest. Additional great choice in the musical section

I look forward to reading your post. Thank you for entering.

One can never go wrong with Metallica :)